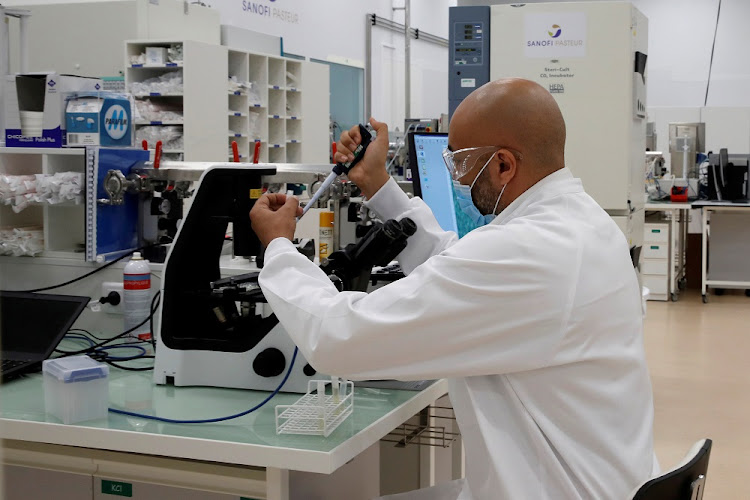 Sanofi said it would launch a phase 2b study in February of next year instead after a recent challenge study in non-human primates performed with an improved antigen formulation demonstrated better effects.
Image: REUTERS/Gonzalo Fuentes/File Photo

An experimental Covid-19 vaccine developed by Sanofi and Britain's GlaxoSmithKline showed an insufficient immune response in clinical trial results, the French drugmaker said on Friday, a blow to efforts to fight the pandemic.

The two companies said they planned to launch another study next year, hoping to come up with a more effective vaccine by the end of 2021.

The news comes as a disappointment for a crop of vaccines under development that rely on more conventional proven designs as the shot developed by Pfizer and Biotech using breakthrough technology gets rolled out across Britain.

Friday's results, Sanofi said, showed “an immune response comparable to patients who recovered from Covid-19 in adults aged 18 to 49 years, but a low immune response in older adults likely due to an insufficient concentration of the antigen.”

Phase III studies were expected to start this month.

Sanofi said it would launch a phase 2b study in February of next year instead after a recent challenge study in non-human primates performed with an improved antigen formulation demonstrated better effects.

“The study will include a proposed comparison with an authorised Covid-19 vaccine,” the company said.

“If data is positive, a global Phase III study could start in Q2 2021. Positive results from this study would lead to regulatory submissions in the second half of 2021, hence delaying the vaccine's potential availability from mid-2021 to Q4 2021.”

The two companies said they had “updated governments and the European Commission where a contractual commitment to purchase the vaccine has been made.”

The Sanofi-GSK vaccine uses the same recombinant protein-based technology as one of Sanofi's seasonal influenza vaccines. It will be coupled with an adjuvant, a substance that acts as a booster to the vaccine, made by GSK.

The companies would have been be 14th player to embark on Phase III studies on potential vaccines as governments struggle to tame the pandemic that has killed more than 1.5 million people, according to World Health Organisation records.

The Phase I/II study tested the safety, tolerability and immune response of the vaccine in 440 healthy adults across 11 investigational sites in the US.

The partners are not the first in the race, but they believe their respective experience in the fields of vaccines is an advantage.

This week, Britain started deploying a vaccine that uses a breakthrough mRNA technology developed by Pfizer and Biotech, jumping ahead of the rest of the world in the race. Canada gave the greenlight for the shot, too.

The data comes as the US regulator considers the Pfizer-BioNTech vaccine for approval. Rival developers AstraZeneca Plc and Moderna have also reported late stage data that shows their shots are effective at preventing the virus.

The French group is also working on another vaccine candidate to prevent Covid-19 with US company Translate Bio which will rely on a different technology called mRNA, similar to the developed by Pfizer and Moderna.

Phase I trials for this vaccine are expected to start this month.

Sanofi and GSK have scaled up manufacturing to be ready to produce up to one billion doses of their vaccine in 2021 and have secured a handful of contracts including deals with the European Union, the US, Canada and Britain.

GSK is contributing adjuvants to two other Covid-19 vaccines projects, one with Medicago of Canada and the other with China's Clover Biopharmaceuticals.

Australia cancelled the production of a locally made vaccine against Covid-19 after trials showed it could interfere with HIV diagnosis, with the ...
News
6 months ago

More women than men in US nervous about fast rollout of Covid vaccine, and that's a problem

American women, who traditionally make most of the healthcare decisions in their families, are more wary than men of the new, rapidly developed ...
News
6 months ago

The Bill & Melinda Gates Foundation this week announced that it would contribute an additional $250m (about R3.77bn) to support the research, ...
News
6 months ago