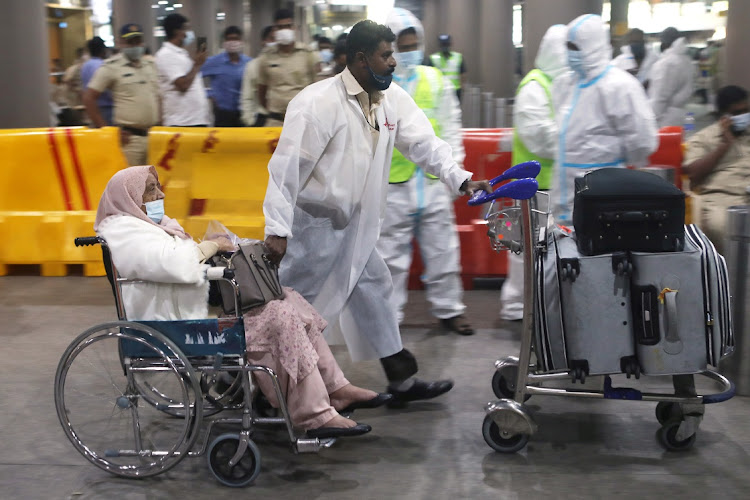 An airport official helps a passenger wearing a protective face mask upon arrival at Chhatrapati Shivaji Maharaj International Airport after India cancelled all flights from the UK over fears of a new strain of the coronavirus disease (Covid-19), in Mumbai, India, December 22, 2020.
Image: REUTERS/Francis Mascarenhas

Passengers flying into India's biggest airports on Wednesday complained of long waits and confusion as authorities sought to impose rules to try to stop the spread of a new more transmissible variant of the coronavirus.

Like many countries, India has suspended flights from Britain, where cases have soared because of the variant.

People arriving from Britain before the ban came into force on Wednesday were being tested, including Kamini Saraswat whose plane landed in New Delhi just before midnight.

Despite pre-booking a test, her turn came nine hours after arrival and she told Reuters she was still stuck at the airport waiting for the result.

Cellphone footage taken by Saraswat, shared with Reuters, showed long lines of passengers and crowds packed together about desks to get themselves tested.

India's hardest-hit state of Maharashtra, home to financial capital Mumbai, has taken additional measures, quarantining most passengers arriving from Europe and the Middle East for a week. Many European and Middle Eastern countries have also suspended flights from Britain, but act as transit hubs for the big airlines flying into India.

Ishwari Gaurav Naik, who arrived in Mumbai from Dubai at about 2am on Wednesday, said she had to wait more than six hours before authorities sent her and three family members to a quarantine facility.

“There was huge chaos there,” Naik said from her temporary accommodation at a school. “Nobody knows anything. There is no co-ordination between staff.”

Delhi and Mumbai airport officials declined to say, and local officials in both cities and India's federal health ministry did not respond to questions from Reuters.

Federal authorities have said that all required measures will be undertaken but have given few details of how the extra cheques will be staffed.

India's plan to track down and screen all arrivals from Britain since Nov. 25 is also getting stretched.

Immigration officials are tasked to provide the details of all travellers from Britain since then. They will be then contacted by state and district health officials.

A 54-year-old British citizen who flew into Mumbai on Monday morning said he was yet to receive either the result of his airport coronavirus test or any follow-up calls.

“The intention may be very good, but it is all down to the execution,” he said, declining to be named.

The maker of one of India's leading Covid-19 vaccine candidates said on Tuesday its recruitment of volunteers for a late-stage trial of the shot was ...
News
1 year ago

Cricket Australia said on Sunday they were still planning to play the third test against India in Sydney in early January, despite an outbreak of ...
Sport
1 year ago

Production and delivery challenges set up turbulent Year of the Vaccine

As 2020 closes, regulatory approval of Covid-19 vaccines has raised hopes the world can defeat the pandemic next year.
News
1 year ago