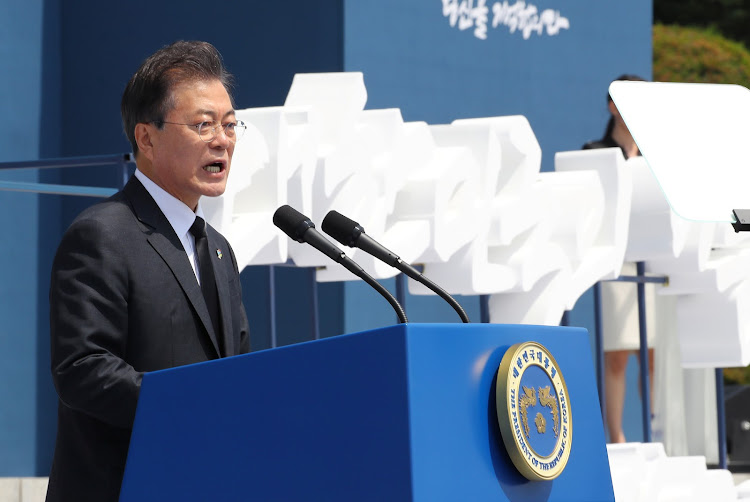 South Korean President Moon Jae-in faced growing public pressure on Wednesday over his Covid-19 vaccine procurement plans as the country struggled to contain a third wave of the pandemic, reporting its second-highest daily tally of cases.

Domestic media has lambasted the government's approach to securing newly developed Covid-19 vaccines as too relaxed and overly reliant on locally produced shots, which will take more time than overseas options.

According to a poll by research firm Realmeter, six in 10 South Koreans believe urgency should be prioritised over safety when it comes to Covid-19 vaccines and that inoculations should begin as soon as possible given the rapid surge in new cases.

South Korea had 1,092 new coronavirus cases on Tuesday, bringing the national tally to 52,550, with 739 deaths, the Korea Disease Control and Prevention Agency (KDCA) said. The record of 1,097 cases was logged on Sunday.

Late on Tuesday, Moon's office said a public inoculation programme would “not begin too late”. The government has previously said vaccinations could start as early as February.

Health authorities have expressed concern over public perceptions that view the vaccination programme as a global competition, emphasising instead the significance of confirming the safety of the shots.

The US and the United Kingdom, suffering much higher cases and death rates, have no alternative to antivirus measures other than the vaccines, Son Young-rae, a senior official at the health ministry, told a briefing.

“These countries are somewhat inappropriate for us to take as teachers, and considering the process of safety cheques, we believe there is no reason for us to be the world's first or second country to receive the vaccines,” Son said.

Meanwhile, the first batch of Covid-19 vaccines for US military personnel stationed in South Korea will arrive as early as Thursday, a source familiar with the plan told Reuters.

Roughly 28,500 US troops are stationed in South Korea.

The US Forces Korea (USFK) said it will begin to administer the vaccines and that the initial inoculations would be limited to front-line health care workers and first responders.

“Over the next few days, USFK will begin to receive and administer the Moderna Covid-19 vaccine to combat the Covid-19 virus to further protect the force and our community,” the USFK said in a statement.

South Korea's aggressive tracing and testing early in the pandemic had made the country a global success story but the recent surge in cases has confounded efforts to contain the virus.

Prime Minister Chung Sye-kyun said on Wednesday that authorities have so far secured about 8,000 of a targeted 10,000 additional hospital beds for Covid-19 patients with the help of private hospitals.

Seoul and its surrounding areas have banned gatherings of more than four people from December 23 to Jan. 3, and both restaurant owners and patrons may face up to 3 million won ($2,700) in fines for violation of the order.

Authorities have also shut down all ski resorts and winter tourist spots in a bid to stop the spread during the Christmas and New Year holidays. Covid

South Korea's capital Seoul and surrounding areas banned gatherings of more than four people over the Christmas and New Year holidays as the country ...
News
1 year ago