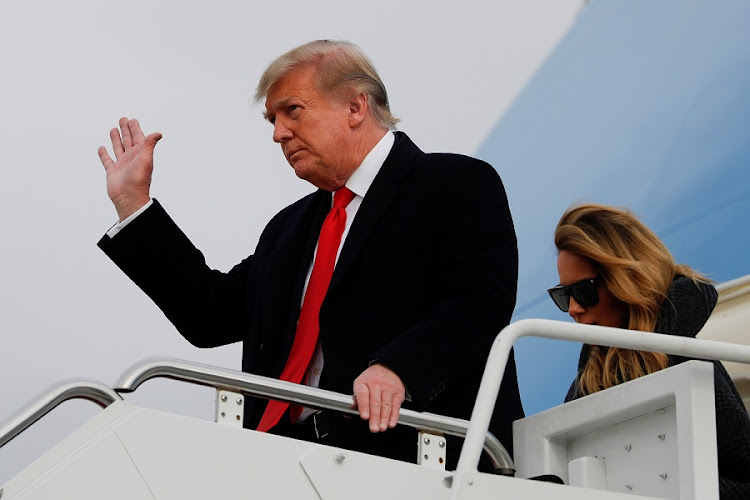 US president Donald Trump and first lady Melania Trump descend from Air Force One at Joint Base Andrews in Maryland in the US on December 31 2020. Trump is continuing to claim he lost to Democrat Joe Biden due to voter fraud.
Image: REUTERS/Tom Brenner

US president Donald Trump pressured Georgia's top election official to “find” enough votes to overturn his defeat in the southern state, according to a recording of the hour-long call published by US media on Sunday.

The call on Saturday was the latest move in Trump's two-month effort insisting his loss to Democratic president-elect Joe Biden in the November 3 election was the result of widespread voter fraud, a claim widely rejected by state and federal election officials and multiple courts.

Trump's call to Georgia secretary of state Brad Raffensperger, a fellow Republican, came as some of Trump's allies in the US Congress plan to object to the formal certification of Biden's victory on Wednesday. The former vice-president won by a margin of 306-232 in the state-by-state Electoral College, and by more than 7m votes overall.

During the call, released by the Washington Post, Trump repeatedly pressures Raffensperger to declare he won more votes than Biden.

“All I want to do is this: I just want to find 11,780 votes, which is one more than we have,” Trump says, according to audio of the call.

“There's nothing wrong with saying, you know, that you've recalculated.”

Raffensperger and his office's general counsel rejected Trump's assertions and told the president he was relying on debunked conspiracy theories spread on social media about what was a fair and accurate election.

“Mr President, the challenge you have is the data you have is wrong,” Raffensperger said.

Millions of Americans are about to see their jobless benefits expire on Saturday as President Donald Trump has so far refused to sign into law a $2.3 ...
News
1 year ago

Donald Trump is expected to leave the US presidency on January 20.
Opinion & Analysis
1 year ago

Trump's action drew immediate criticism from election law experts and congressional Democrats who said it could amount to an illegal act.

“Not only is pressuring election officials against the law, threatening Raffensperger if he doesn't comply with Trump's wishes borders on extortion,” said Democratic senator Dianne Feinstein.

“If any other person did this — someone else with power to leverage over an election official — there is no doubt in my mind that at the very least a criminal investigation would be opened right away,” said Kreis, adding  he thought that was unlikely in Trump's case.

If Trump were prosecuted, he would likely argue he genuinely believed the election was rigged against him in elaborate ways, said Justin Levitt, an election law professor at Loyola Law School.

Biden's narrow victory in Georgia was the first by a Democratic presidential candidate in a generation, and has raised hopes among Democrats that they could win a pair of US Senate run-offs in the state on Tuesday, giving their party control of Congress.

Over the course of the call, Trump alternately cajoled, insulted and threatened Raffensperger as he tried to convince him to overturn the results.

“We won the election and it's not fair to take it away from us like this, and it's going to be very costly in many ways,” Trump said. “I think you have to say you're going to re-examine it.”

Since his election loss, Trump has encouraged supporters to hold raucous street rallies that have occasionally tipped into violence.

Raffensperger and other election workers across the country have faced harassment and threats, with some going into hiding for their safety.

“There's turmoil in Georgia and other places. You're not the only one. We have other states I believe we'll be flipping to us very shortly,” Trump said.

Millions of Americans saw their jobless benefits expire on Saturday after US President Donald Trump refused to sign into law a $2.3 trillion pandemic ...
News
1 year ago

President Donald Trump threatened on Tuesday to not sign an $892 billion coronavirus relief bill that includes desperately needed money for ...
News
1 year ago

Even if Trump had won Georgia's 16 Electoral College votes, he would still have lost the White House to Biden, who will be sworn into office on January 20.

Trump's lawyers have had no luck over the past two months as they have pressured officials in Michigan, Arizona, Pennsylvania and other closely contested states to overturn his losses.

Trump's call came days before senator Ted Cruz is set to lead several fellow Republican lawmakers in a long shot bid to disrupt the formal recognition of Biden's win when Electoral College results are tallied in Congress on January 6.

The move is seen as a mostly symbolic protest and is not supported by Senate Republican leaders.

Republican senator Lindsey Graham, a staunch Trump supporter, said in a statement on Sunday that Cruz' insistence on a vote audit commission had “zero chance” of success.

Senate Democratic leader Chuck Schumer said on Twitter that if Cruz and “his gang” wanted to investigate election fraud, they should start with Trump's call with Raffensperger.

Ten former defence secretaries urged Trump to concede, writing in a joint article that the time for questioning the results had passed, and that any effort to involve the US armed forces in resolving election disputes “would take us into dangerous, unlawful and unconstitutional territory.”

Republican US senator Mitt Romney said a widespread data breach across the US government was "extraordinarily damaging" and that President Donald ...
News
1 year ago

Irritated by loss, Trump hunkers down at the White House and avoids talk of future

Hunkered down in what one former White House official called the "presidential man cave" of the Oval Office, President Donald Trump does not want to ...
News
1 year ago