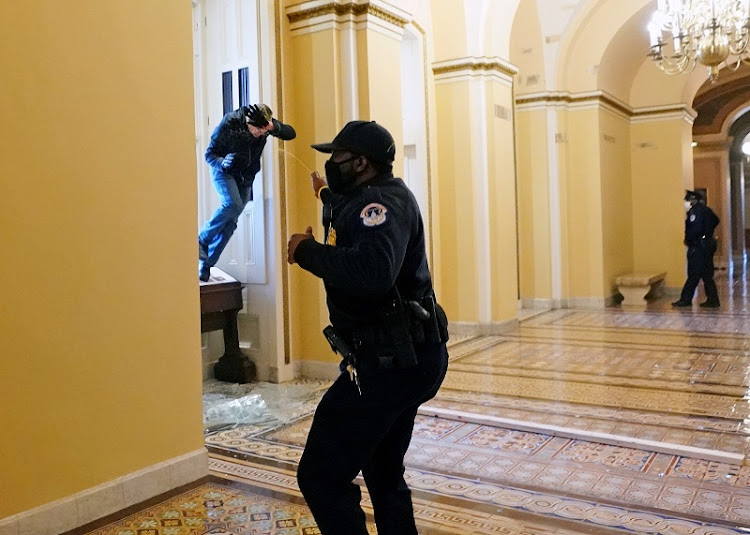 A U.S. Capitol police officer shoots pepper spray at a protestor attempting to enter the Capitol building during a joint session of Congress to certify the 2020 election results on Capitol Hill in Washington, U.S., January 6 2021.
Image: Kevin Dietsch/Pool via REUTERS TPX IMAGES OF THE DAY

Protesters supporting Donald Trump swarmed the U.S. Capitol on Wednesday, putting it on lockdown, as Vice President Mike Pence rebuffed the president's demand to overturn his loss to Democrat Joe Biden and the Senate's Republican leader denounced a bid in Congress to undo the election outcome.

Trump supporters overturned barricades and clashed with police on the U.S. Capitol grounds and streamed inside the building. The demonstrations flared as lawmakers met inside to formally certify Biden's victory over Trump in the Nov. 3 election. Law enforcement authorities struggled to maintain order.

The Senate and the House of Representatives, which were weighing objections to Biden's victory brought by a band of pro-Trump Republican lawmakers, abruptly and unexpectedly recessed.

Pence, a loyal lieutenant during the four years of Trump's tumultuous presidency, presided over the opening of the joint session of Congress to formally certify Biden's Nov. 3 victory over Trump. A band of Republican lawmakers quickly challenged the results, first from the election battleground state of Arizona won by Biden.

Senate Majority Leader Mitch McConnell objected to the effort, saying, "If this election were overturned by mere allegations from the losing side, our democracy would enter a death spiral." McConnell helped give Trump some of the biggest accomplishments of his presidency, including deep tax cuts and confirmation of conservative judicial nominees.

Biden won the election by 306-232 in the state-by-state Electoral College and by more than 7 million ballots in the national popular vote, but Trump continues to falsely claim there was widespread fraud and that he was the victor.

The voters, courts and states "have all spoken," McConnell said on the Senate floor. "If we overrule them, it would damage our republic forever," he added.

Senate Democratic Leader Chuck Schumer called the challenges "an attempted coup" and said, "The Congress does not determine the outcome of an election. The people do."

Pence turned away Trump's demand that the vice president unilaterally reject state electoral votes on the same day Trump's fellow Republicans were poised to lose their majority in the Senate. The joint session of Congress could last past midnight.

"We will never give up," Trump earlier told thousands of cheering supporters on a grassy expanse near the White House called the Ellipse. "We will never concede. It doesn't happen. You don't concede when there's theft involved."

Trump in his speech applied fresh pressure on Pence to try to reverse the election results. In a statement, Pence said he shares the concerns about the "integrity" of the election but that is not correct that he should be able to accept or reject electoral votes unilaterally.

The U.S. Constitution does not give Pence the power to unilaterally overturn the results of the election, but he is under pressure to do so from Trump.

US President Donald Trump pressured Georgia's top election official to “find” enough votes to overturn his defeat in the southern state, according to ...
News
1 year ago