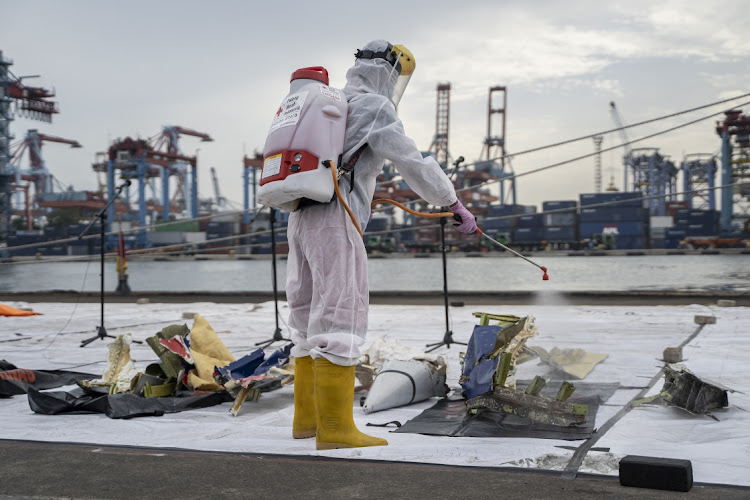 Indonesian Red Cross spray disinfectant around the debris of Sriwijaya aircraft on January 12, 2021 in Jakarta, Indonesia. Sriwijaya Air flight SJY182, carrying 62 people on board a flight from Indonesia's capital to Pontianak, Indonesia, lost contact with air controllers shortly after take-off and is believed to have crashed into the waters off the coast of Jakarta.
Image: Oscar Siagian/Getty Images

Indonesia on Wednesday temporarily suspended a search by divers for the cockpit voice recorder of a Sriwijaya Air that crashed with 62 people on board shortly after take-off.

The search in the Java Sea had to be halted due to bad weather that whipped up waves of up to 2.5 metres (8.2 feet) in height, officials said.

Earlier on Wednesday, divers retrieved more debris and a damaged Identity card of one of the victims, Navy official Abdul Rasyid told reporters on board the Indonesian navy ship Rigel.

Divers retrieved the plane's flight data recorder (FDR) from the seabed on Tuesday and officials said they had also found the beacon that was attached to the cockpit voice recorder (CVR).

A remotely operated underwater vehicles (ROV) will be deployed to scour the seabed on Wednesday, Abdul said, adding that the search had been made more complicated because no pings were now being emitted after the beacon detached from the CVR.

Military chief Hadi Tjahjanto said on Tuesday he had “high confidence” of finding the recorder soon.

The Boeing 737-500 jet crashed into the Java Sea on Saturday four minutes after take-off from Jakarta's main airport.

Indonesia detected signals on Sunday that could come from a flight recorder of a Sriwijaya Air jet that crashed into the sea after taking off from ...
News
1 year ago

Indonesian plane loses contact after take-off, more than 60 thought to be aboard

A Sriwijaya Air plane thought to have 62 people on board lost contact after taking off from Indonesia's capital Jakarta on Saturday and rescuers said ...
News
1 year ago

Investigators will rely heavily on the two black boxes to determine the cause of the crash.

The FDR contains about 25 hours of data on eight tracks and the CVR has 30 minutes of conversation, according to the final report on a similar model of a Boeing 737 which crashed in 2008.

A team from the US National Transportation Safety Board will be travelling to Jakarta in coming days to help with the investigation.

The KNKT's initial findings showed the plane's engine was running when it hit the water, based on the damage seen on jet parts retrieved from the sea.

Indonesia's transport ministry said on Tuesday the plane, which was grounded during the early months of the coronavirus pandemic, had passed an airworthiness inspection on Dec. 14 and had returned to service shortly after.

EXPLAINER-How black boxes of crashed Indonesian jet will be handled

Indonesian authorities have retrieved one of two black boxes, the Flight Data Recorder, from a Sriwijaya Air Boeing 737-500 that crashed into the Java Sea on Saturday.

This is how the black box readout process works.

WHAT ARE BLACK BOXES?

They are not actually black but high-visibility orange. Experts disagree how the nickname originated but it has become synonymous with the quest for answers when planes crash.

Many historians attribute their invention to Australian scientist David Warren in the 1950s. They are mandatory.

The aim is not to establish legal liability, but to identify causes and help prevent future accidents.

HOW HAVE THEY EVOLVED?

The earliest devices recorded limited data on wire or foil. Models like those typically found on the 1980s-designed Boeing 737-50 use magnetic tape. Modern ones use computer chips.

The recordings are housed inside crash-survivable containers able to withstand 3,400 times the force of gravity on affect.

The disappearance in 2014 of Malaysian Airlines MH370 triggered debate about whether data should be streamed instead.

Airbus and France's BEA are testing an alternative design in a floatable panel embedded in the aircraft's fuselage. Bolts would retract and the device would fall away when the plane is about to crash on water, avoiding a deep-sea search.

HOW BIG ARE THEY?

They weigh about 10 pounds (4.5 kilos) and contain four main parts:

* inside there, the recordings on chips or older formats.

There are two recorders: a Cockpit Voice Recorder (CVR) for pilot voices or cockpit sounds, and a Flight Data Recorder (FDR).

HOW WILL THE RECORDERS BE HANDLED?

After a crash over the sea, the recorder is placed back in water to prevent damage from contact with air while being transported.

Once dry, technicians peel away protective material and carefully clean and retrieve the recordings, which are copied.

Lab experts sometimes use “spectral analysis,” a way of examining sounds that can pick out barely audible alarms or the first fleeting crack of an explosion. Indonesian investigators say the Sriwijaya jet appeared to be intact when it hit water.

HOW MUCH INFORMATION IS AVAILABLE?

The FDR contains about 25 hours of data on eight tracks and the CVR has 30 minutes of conversation, according to the final report on a similar model of Boeing 737 which crashed in 2008.

In many countries, only the main investigator and a handful of people are allowed to hear the raw cockpit tapes.

WHERE WILL THE DATA BE READ?

Indonesian officials leading the probe have said they plan to perform the readout at their facilities. If recorders are badly damaged, the operation is occasionally delegated to an overseas agency like France's BEA or the device's manufacturer.

Photographs of the Sriwijaya data recorder arriving at a port on Tuesday appeared to show its crash-resistant container intact.

HOW LONG WILL THE RESULTS TAKE?

Indonesia has said it will take 2-5 days to inspect and download recordings. Their analysis can take much longer.

Interim reports are published after a month but are often sparse. Deeper investigations take a year or more to complete.

Experts say air accidents are usually caused by a cocktail of factors.