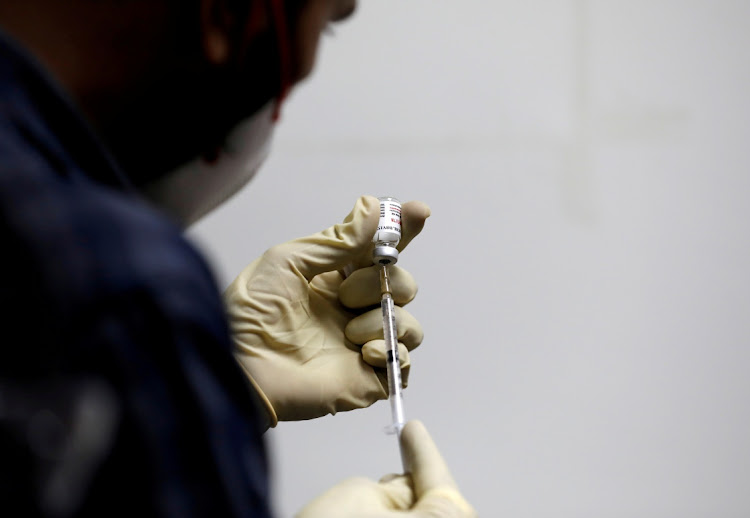 A medic fills a syringe with COVAXIN, an Indian government-backed experimental Covid-19 vaccine, before administering it to a health worker during its trials, at the Gujarat Medical Education and Research Society in Ahmedabad, India, November 26, 2020.
Image: REUTERS/Amit Dave/File Photo

India will treat a domestic Covid-19 vaccine “equally” with a prominent global one, even though the home-grown drug's efficacy has not been proven, and people will have no choice which one they get, a top government vaccine official told Reuters.

The government on Saturday will launch one of the world's biggest vaccination programmes with shots manufactured in India — one developed by Oxford University and AstraZeneca Plc, the other by Bharat Biotech International Ltd with a state-run institute.

Administering Bharat Biotech's COVAXIN, a move cheered by nationalist politicians, has worried some health experts who consider it rushed, as the vaccine has only limited, “clinical-trial mode” approval. In addition to efficacy concerns, the close monitoring required for its use will be a huge challenge in a country of 1.35 billion people.

Controversy over COVAXIN — similar to what China and Russia faced for pushing through their own shots before their efficacy was known — risks undermining India's position as the vaccine capital of the world, medical ethics groups say.

“No vaccine is a backup to the other — both vaccines are equally important, both vaccines are hugely immunogenic,” Vinod K. Paul, who heads a government panel on vaccine strategy, said in an interview. They excite immunity against the virus.”

“There is no choice to the individual at this point of time” as India ramps up production of the vaccines, he said.

This marks the government's clearest statement that recipients may not choose their vaccine. The health secretary said this week that no other country allows a choice but stopped short of saying India would do the same.

Experts at India's drug regulator this month recommended stricter monitoring for COVAXIN, as is done during clinical trials, especially if cases of infection by mutant strains of the virus spread fast. At the same time, the government wants to inoculate as many people as possible as demand for vaccines outstrips supply.

Indian health advocacy groups, watchdogs and opposition politicians have questioned the local vaccine's approval, which came just a day after the authorities asked Hyderabad-based Bharat Biotech for more evidence it would work.

“This achievement will indeed be hailed as a major Indian scientific achievement once efficacy data is released, but by this hasty approval without evidence, the government has shot itself in the foot,” the All India People's Science Network, a network of science advocacy groups, said in a statement.

“Whatever prestige India may gain abroad for an indigenously developed vaccine will be outweighed by the damage caused to the credibility of COVAXIN in particular, and of Indian science, research and regulatory institutions.”

The AU Union has secured a provisional 270 million Covid-19 vaccine doses from manufacturers for member states to supplement the COVAX programme, ...
News
6 months ago

Paul defended moving ahead with the drug, which Bharat Biotech developed with the Indian Council of Medical Research, saying all Covid-19 vaccines in the world, including those by Pfizer Inc and Moderna Inc, are administered under emergency authorisation.

“The scientific rigour under the circumstances of the pandemic has been respected in a robust manner,” Paul said. “There is no pressure” on India's regulator, the Central Drugs Standard Control Organization. “They take decisions based on science and regulatory norms.”

Prime Minister Narendra Modi has said every Indian should be proud of the made-in-India COVAXIN, calling its approval a sign of a “self-reliant” country.

Brazil this week became the first foreign country to sign a deal to buy the Indian shot.

India's emphasis on the domestic vaccine comes as the government asks Pfizer and Moderna to make their highly efficacious shots in India for local and global distribution.

Paul said Pfizer would have to do an additional safety and immunogenicity trial in India.

He said it is the responsibility of government officials like himself to answer questions about COVAXIN. All required protocols — such as closer proactive monitoring of recipients for any adverse effects — will be followed, he said.

India has signed a purchase order with vaccine producer Serum Institute to procure AstraZeneca's Covid-19 vaccine, a source said on Monday, the first ...
News
6 months ago

The government has already bought 11 million doses of the AstraZeneca COVISHIELD shot and 5.5 million of COVAXIN — whose efficacy results from last-stage trials are expected by March.

Paul declined to say whether the government, which wants about 600 million vaccine doses in the next six to eight months, would buy an equal number of doses of both vaccines. Bharat Biotech did not respond to requests for say.

The drug regulator believes COVAXIN will be more effective on new strains of the coronavirus as it is designed to act against the whole body of a virus, not just its “spike-protein” tip.

Some of its experts, nevertheless, were reluctant to give the emergency nod to COVAXIN for much of the hours-long meetings they had late last month and early this month, said a person with direct knowledge of the deliberations.

Published minutes  of the meetings also showed that the initial position of the panel — which had wanted to wait for some sort of efficacy data — changed in a matter of days.