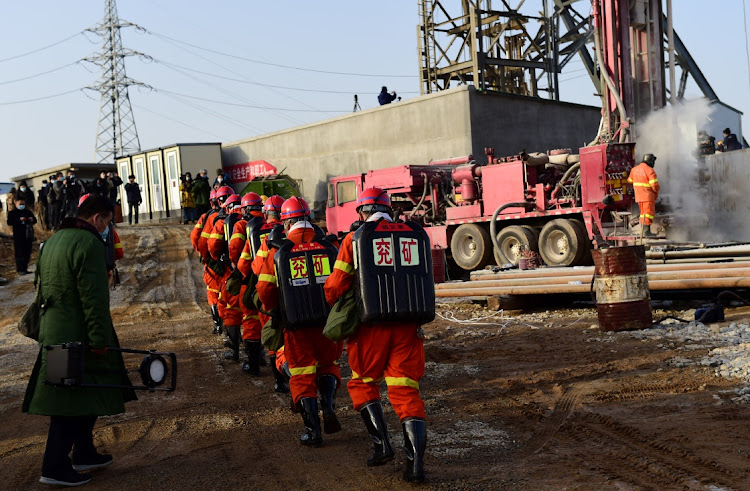 Rescuers are seen at the site where workers were trapped underground after an explosion at the gold mine under construction, in Qixia, Shandong province, China January 13, 2021.
Image: cnsphoto via REUTERS / File photo

China has deployed 16 professional rescue teams and dozens of medical personnel to try to save 12 miners trapped underground for 10 days after an explosion in a gold mine in northern China's Shandong province, state media reported.

A total of 22 miners were left trapped after an explosion on January 10 at the Hushan gold mine on the outskirts of the city of Yantai on China's eastern coast.

At least 12 were found to be still alive after a note was retrieved a week later expressing hope that the rescue work would continue.

Rescuers found 11 of the survivors on Tuesday and spoke to them via a waterproof telephone delivered underground, the official provincial newspaper Qilu Daily said on Wednesday.

Newly drilled channels have enabled the teams to deliver food, medicine and blankets, improve ventilation, and drain away water before they begin the extraction effort.

Eight of the 11 miners reached on Tuesday were in good health, two were unwell and one was in a coma after being struck in the head during the explosion, the Qilu Daily said, citing the headquarters of the rescue teams.

The 12th surviving miner is in another section and is believed to be injured, though the situation remains unclear.

The handling of the accident by local authorities has been criticised by state media, and two senior officials have been dismissed.