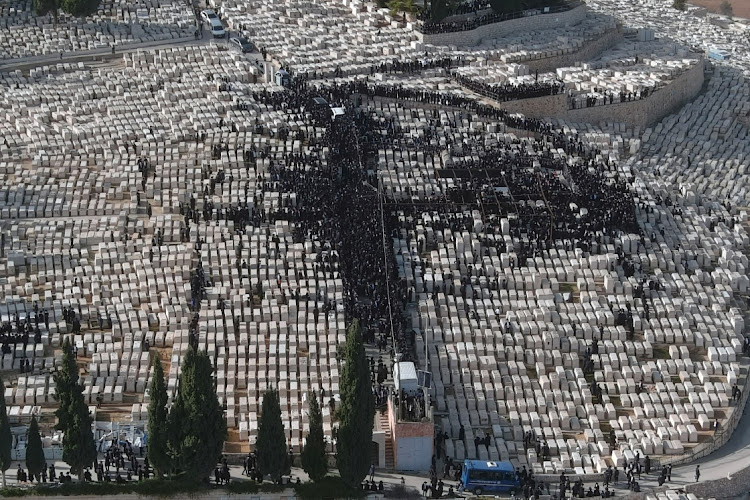 An aerial view shows Ultra Orthodox Jews taking part in a funeral of a Jewish spiritual leader amid the coronavirus disease ( Covid-19) restrictions in a cemetery in Jerusalem January 31, 2021. Picture taken with a drone.
Image: REUTERS/Ilan Rosenberg

Israel extended a national lockdown on Sunday as coronavirus variants offset its vaccination drive and officials predicted a delay in a turnaround from the health and economic crisis.

Netanyahu has promoted a speedy vaccination of Israel's most vulnerable cohorts — about 24% of 9 million citizens — and the lockdown as dual pathways to a possible reopening of the economy in February.

But a projected mid-January turnaround in curbing the pandemic did not transpire. Serious cases have surged among Israelis who have not yet been vaccinated. Officials blame that on communicable foreign virus strains and on lockdown scofflaws.

Netanyahu's cabinet voted to extend the five-week-old lockdown until Friday, with a separate ban on international flights to remain in place until Sunday, his office said in a statement. Parliament earlier voted to double fines for lockdown violators to 10,000 shekels ($3,051).

Violations by ultra-Orthodox Jews, who are among the conservative Netanyahu's supporters, have been played up by political rivals in questioning the lockdown's efficacy — and building opposition to him ahead of a March 23 election.

“Either everyone is locked down, or everything is opened up for everyone. The days of chicanery are over,” Defence Minister Benny Gantz, Netanyahu's centrist coalition partner and now election competitor, wrote on Twitter.

In an apparent defence of ultra-Orthodox Jews, Netanyahu said that lockdown violations had taken place among secular Israelis and the country's Arab minority, as well.

The ultra-Orthodox, whose often high-density communities make up about 15% of Israel's population, account for some 35% of recent contagions, according to the Health Ministry.

Deputy Health Minister Yoav Kisch said there would be “a few weeks' delay” to the Israeli exit plan, and set a higher vaccination threshold for a turnaround.

“Our goal is to achieve 5.5 million (fully vaccinated citizens) and I reckon that the moment we cross the 3-to-3.5 million (mark), you will already see change,” he told Kan radio.

As of Saturday, 1.7 million Israelis had received the second dose of the Pfizer Inc/BioNTech vaccine more than a week ago, achieving the maximum 95% protection, the Health Ministry said.

About a further 1.3 million had either received one dose and were awaiting the second or had received the second dose within the past week and so were not yet designated as fully vaccinated.

We are not in a race over vaccines, says EU's Von der Leyen

The head of the European Commission rejected suggestions that Europe was in a race to vaccinate its population against the coronavirus faster than ...
News
5 months ago

A Jewish newspaper has been ordered to apologise after labelling a pro-Palestine activist organisation "anti-Semitic".
Politics
5 months ago