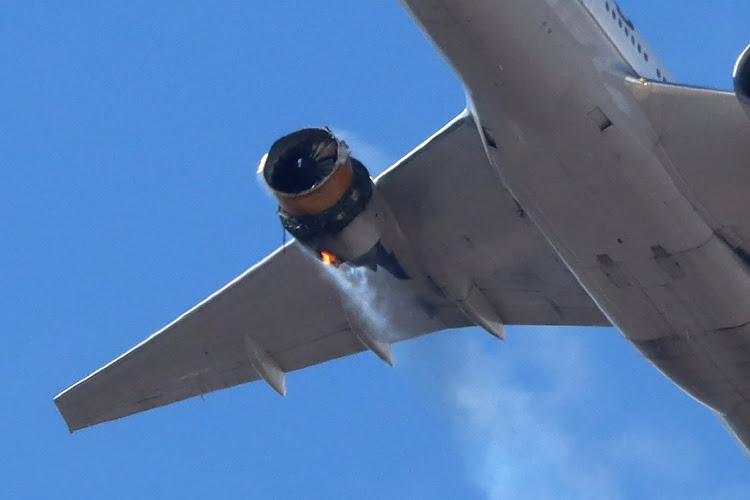 United Airlines flight UA328, carrying 231 passengers and 10 crew on board, returns to Denver International Airport with its starboard engine on fire after it called a Mayday alert, over Denver, Colorado, US February 20, 2021.
Image: Hayden Smith/@speedbird5280/Handout via REUTERS.

A United Airlines flight landed safely at Denver International Airport on Saturday after its right engine failed, the Federal Aviation Administration said, with dramatic images showing debris from the plane scattered on the ground.

The Boeing 777-200 plane, with 231 passengers and 10 crew on board, was heading to Honolulu when it suffered an engine failure soon after take-off, the airline said.

There were no reports of injuries, either on the plane or the ground.

Images posted by police in Broomfield, Colorado showed significant plane debris on the ground, including an engine cowling scattered outside a home and what appeared to be other parts in a field. Police tape was used to cordon off the debris.

One video taken from what appeared to be inside the United plane showed an engine on fire.

Another video on social media showed a cloud of black smoke being left by a plane.

“Something blew up,” a man on the video can be heard saying.

Heart stopping clip showing a passenger jet engine burst into flames above the US state of Colorado. Debrit fell onto homes below but thankfully landed safely.🙏🏽 pic.twitter.com/3qhcLHzug5

In an audio recording, a United pilot could be heard making a mayday call to air traffic control.

“Mayday, aircraft just experienced engine failure, need to turn immediately,” according to audio from the monitoring website liveatc.net which was reviewed by Reuters.

The FAA said it and the National Transportation Safety Board (NTSB) will investigate. The NTSB said it had opened an investigation.

“If you find debris PLEASE don't touch it or move it. The @NTSB wants all debris to remain in place for investigation,” the Broomfield police department said on Twitter.

The 26-year-old 777 was powered by two Pratt & Whitney PW4000 engines. Investigators will focus on what caused the accident and will look at whether a fan blade failed.

Boeing said its technical advisers would assist the NTSB with its investigation, while United pledged to “work with federal agencies investigating this incident.”

Luckily, no one was hurt and the airplane returned safely to the Denver airport. ✈️#engineering #plane #chunks https://t.co/JxWrnimvAx

United said most of the passengers on Flight 328 took off on a new flight to Honululu late Saturday.

Engine failures are rare but are potentially dangerous whenever rotating parts pierce the outer casing — an event known as an uncontained engine failure.

In February 2018, an older Boeing 777 operated by United and bound for Honolulu suffered an engine failure when a cowling fell off about 30 minutes before the plane landed safely. The NTSB determined that incident was the result of a full-length fan blade fracture.

Because of the United fan blade separation incident, Pratt & Whitney, which is unit of Raytheon, reviewed inspection records for all previously inspected PW4000 fan blades, the NTSB said. The FAA in March 2019 issued a directive requiring initial and recurring inspections of the fan blades on the PW4000 engines.