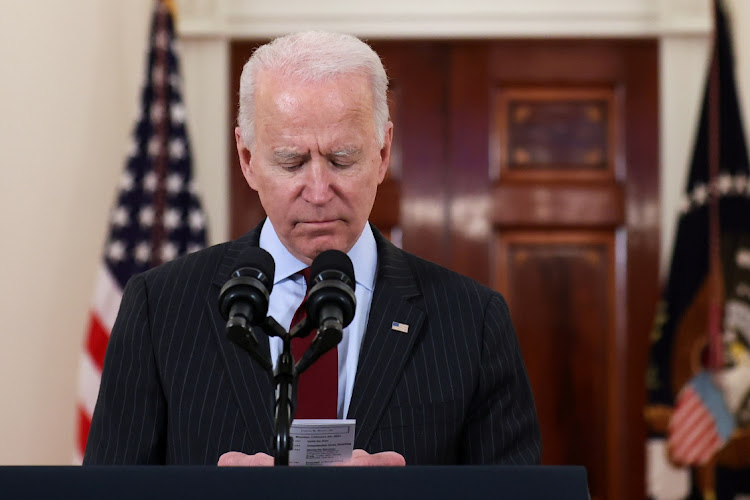 US President Joe Biden looks at his daily schedule, a card which also has an update of US deaths, during his remarks in honor of the 500,000 US deaths from the coronavirus disease (Covid-19), in the Cross Hall at the White House in Washington, US, February 22, 2021.
Image: REUTERS/Jonathan Ernst

President Joe Biden's administration on Monday asked the US Supreme Court to cancel an upcoming oral argument on a policy introduced under his predecessor Donald Trump backing work requirements for people who receive health care under the Medicaid program for the poor.

Acting Solicitor General Elizabeth Prelogar said the Biden administration has started the process of reversing the previous policy and asked the justices to dump the scheduled March 29 arguments concerning pilot programs adopted by the states of Arkansas and New Hampshire.

Under Trump, the Department of Health and Human Services in 2018 approved the pilot projects in those two states as part of a push to put a conservative stamp on Medicaid, a program that was expanded under the Affordable Care Act, also known as Obamacare, to provide coverage to millions more Americans.

Bidencare or Trumpcare? Here’s the prognosis for the US economy

ANALYSIS | Trump’s plan is light on detail, but cheaper, although Biden’s high price tag does worry some
World
6 months ago

Prelogar asked the justices to consider throwing out the pending cases altogether.

Biden, a Democrat, succeeded Trump, a Republican, on Jan. 20. Under Biden, the same department made a preliminary finding that work requirements would be inconsistent with the objectives of Medicaid, which provides medical insurance for the poor, Prelogar told the court.

The justices in December agreed to hear Trump administration appeals of rulings by a lower court that deemed the work requirement programs unlawful. The lower court noted that about a quarter of the people subject to the requirement lost their Medicaid coverage in the first five months after the Arkansas work requirement was implemented.

The Supreme Court on February 3 cancelled oral arguments in two other cases after the Biden administration changed course from Trump policies. Both were appeals by Trump's administration — one defending his funding of the US-Mexico border wall and the other defending his so-called “remain in Mexico” asylum policy.

Trump in 2019 redirected $2.5 billion from military counter-narcotics programs for border wall construction in California, New Mexico and Arizona. Biden issued a proclamation on his first day in office ordering a freeze on border wall projects and directing a review of the legality of its funding and contracting methods.

The “remain in Mexico” policy has forced tens of thousands of migrants to wait in Mexico, rather than entering the US, while their asylum claims are processed.