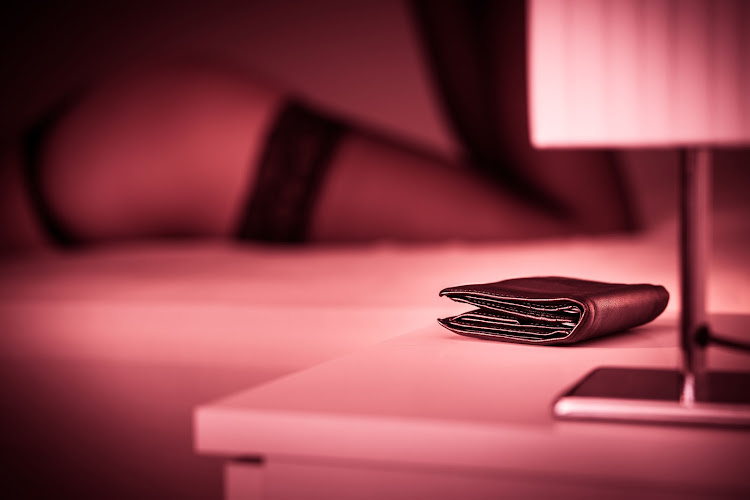 As COVID-19 hit their incomes, hundreds of cash-strapped sex workers in India turned to unofficial moneylenders to get through the pandemic. Stock image.
Image: 123RF/terovesalainen

When Indian sex worker Baji fell behind on her repayments to a loan shark during lockdown, her house was ransacked and her only belongings of any value - the kitchen utensils - were stolen. It was another low point in a terrible year.

As COVID-19 hit their incomes, hundreds of cash-strapped sex workers in southern Andhra Pradesh state turned to unofficial moneylenders to get through the pandemic - most of them lacking the papers needed to get formal bank credit, campaigners said.

"I had nothing left in my kitchen the day the lender approached me with a loan offer. He had a polite and assuring manner and said there was no urgency to repay the money," Baji, 26, who goes by one name, said by phone from Krishna district.

"But he returned week after week. I repaid 1,200 rupees (about $16.50) from the loan itself, but when I stopped they ransacked my home and took all my utensils," the mother-of-two told the Thomson Reuters Foundation. "It was traumatic."

Before the coronavirus swept into India, Baji earned up to 1,000 rupees a day, enough to feed her children and keep a roof over their heads, but last year's lockdown pushed her and other sex workers in India and beyond to the brink.

There are about 800,000 sex workers across India according to government data but campaigners estimate their numbers to be much higher. More than 100,000 are registered in Andhra Pradesh alone, data with campaigners show.

Reflecting concern about the plight of India's informal workers, the nation's human rights panel asked state governments in October to formally recognise sex workers, a step that would have granted them benefits from a $23 billion state aid fund.

But the order was reversed after activists said such a move would be illegal and risked legitimising sex trafficking.

While sex workers did receive some food aid, their lack of earnings made many vulnerable to abuse by loan sharks, especially in Andhra Pradesh where authorities have been trying to rein in widespread informal moneylenders for years.

A collective representing 6,000 sex workers in the state said more than three-quarters of its members were in debt. Many live in fear and face daily threats and abuse from the loan sharks.

"The lenders stand on the streets and yell at them, body shame them. They have started fleeing their homes," said Potluri Devi, who heads the Andhra Pradesh chapter of the National Network of Sex Workers.

"They're drawn to these lenders as they aren't required to give any collateral or identity proofs. They start with small amounts that the women are able to repay. The women feel confident (and) borrow more," Devi said.

"That's how they get trapped."

Authorities in Andhra Pradesh, once known as the centre of India's microfinance sector, have sought to regulate private money lending - widely known as the 'call money' racket due to the ease with which money can be borrowed over the phone.

About a decade ago, the state government curbed microfinance activities after a spate of suicides by borrowers, and in 2015 it banned moneylenders from operating without a licence after arresting about 200 people due to harassment complaints.

But industry analysts said unscrupulous financiers - who charge high interest rates and resort to heavy-handed means to collect debts - are partly the result of inadequate legitimate credit sources in the state.

"These are unsecured loans. There is nobody else to borrow money from," said Harsh Shrivastava, former head of Microfinance Institutions Network, a self-regulatory organisation for the microfinance sector.

Shrivastava said the situation was particularly acute in Andhra Pradesh because unregistered lenders had proliferated due to the vacuum left when microfinance firms offering small loans to low-income borrowers were restricted.

Officials at the state's crime investigation department (CID) said complaints against moneylenders were common, though no specific complaints from sex workers had been received.

"Institutional lending is difficult to approach and this is informal money lending and very flexible, despite outrageous interest rates," said P.V. Sunil Kumar, additional director-general at the CID.

Lenders routinely deduct 10% to 20% from the loan principal even before handing over the money, sex workers and police officials said.

But because they give loans without requiring collateral or documentation, they are like "god", said Ram Mohan, co-founder of anti-trafficking charity HELP.

"Women borrow from one to pay another. They are trapped in this debt cycle," Ram Mohan said.

Many of those who fall behind on their debts are too scared to go to the police if the moneylenders become abusive or violent, campaigners said.

Baji took up sex work at the age of 17 when she was a single parent, recently deserted by her abusive husband, but she had some optimism about the future until her debts spiralled at the height of the lockdown.

After the burglary, she was forced to take up work at a brick kiln, earning 400 rupees for a 12-hour day.

That too was halved after a mound of bricks fell on her leg, requiring surgery costing 20,000 rupees. Her employer lent her the money but deducts repayments from her wages.

"We had problems in sex work, but I was earning and was able to survive and there was hope. I have nothing to look forward to now," she said. ($1 = 0.0138 Indian rupees)

More than 10,000 arrested in KZN for not wearing face masks

More than 10,000 people have been arrested since December for not wearing face masks in KwaZulu-Natal.
News
1 year ago

Two of SA's prime commercial property owners will extend rental relief to struggling tenants this year, in a sign the impact of Covid-19 is far from ...
News
1 year ago

Stats SA says the unemployment rate stood at 32.5% in the October-December quarter, meaning 7.2 million people were unemployed, up from 30.8% in the ...
News
1 year ago