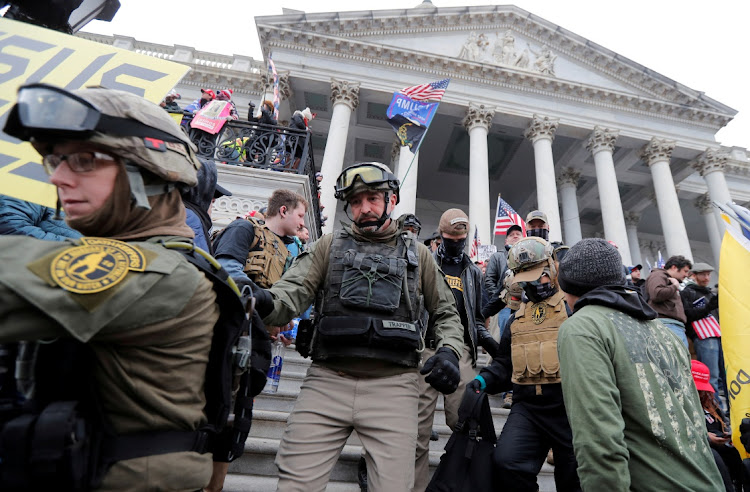 Jessica Marie Watkins (Left) and Donovan Ray Crowl (Center), both from Ohio, march down the East front steps of the US Capitol with the Oath Keepers militia group among supporters of US President Donald Trump protesting against the certification of the 2020 U.S. presidential election results by the US Congress, in Washington, US, January 6, 2021.
Image: REUTERS/Jim Bourg/File Photo

A leader of the far-right group Oath Keepers who is charged with participating in the January 6 riot at the US Capitol reversed her story on Monday about having met with Secret Service agents in Washington on the day of the insurrection.

Jessica Watkins, 38, had said in court papers over the weekend that she had travelled to Washington to provide security for the march, had received a VIP pass to then-President Donald Trump's rally and had met with the Secret Service.

But in a filing on Monday, Watkins' attorney said she had merely spoken with some agents while passing through a security checkpoint.

“Counsel in no way meant to imply that Ms. Watkins met with the Secret Service,” A.J. Kramer, Watkins' court-appointed defence lawyer, wrote. “A better verb would have been 'encountered.'”

Watkins, an Afghanistan war veteran who has pleaded not guilty, is among nine associates of the antigovernment organisation charged with conspiring to storm the Capitol to prevent Congress from certifying President Joe Biden's electoral victory.

Federal prosecutors have accused Watkins of illegally entering the Capitol building. Her attorney has said she did not engage in any violence.

Prosecutors have said the Oath Keepers began planning a military-style assault as early as November. More than 200 people have been charged so far in connection with the attack, which left five people dead, including a police officer.

Trump delivered a fiery speech on January 6 exhorting supporters to march to the Capitol to “stop the steal.”

The ensuing assault prompted the Democratic-controlled House of Representatives to impeach Trump for inciting an insurrection. The Senate acquitted Trump largely along party lines, though seven Republicans voted to convict.

Watkins is asking the court to release her to home confinement while she awaits trial, citing in part the risk of maltreatment she faces in jail as a transgender woman.