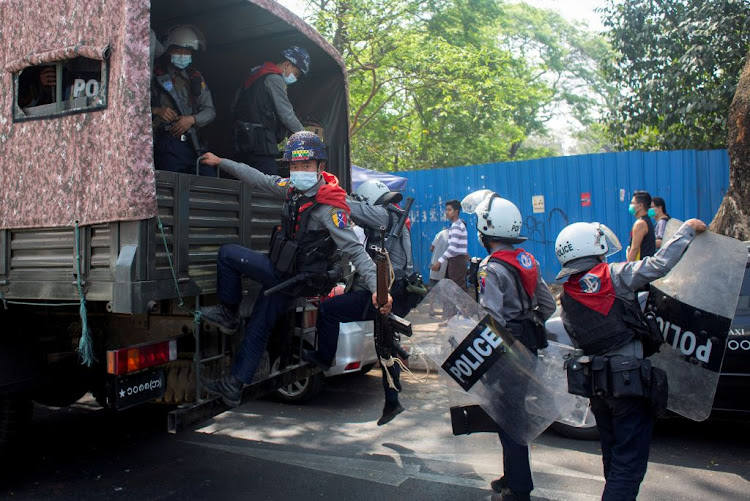 Riot police officers get on a police vehicle during a rally against the military coup in Yangon, Myanmar, on February 26 2021.
Image: REUTERS/Stringer

Police dispersed protesters in Myanmar's two biggest cities on Friday, firing stun grenades, rubber bullets and guns into the air, witnesses said, as the challenge to the army's bid to re-impose its rule showed no sign of slackening.

At least one person was injured in the protests in the main city of Yangon, a witness said, and a photograph posted by a media outlet from the second city of Mandalay appeared to show a wounded protester in the back of an ambulance.

The Southeast Asian nation has been in crisis since the army seized power on February 1 and detained civilian government leader Aung San Suu Kyi and much of her party leadership after the military complained of fraud in a November election that her party won.

A lawyer for Suu Kyi, who is being held under house arrest, complained that he had not been granted access to her, three days before she is due to return to court, adding that it would undermine her right to a fair hearing.

Businesses shut in Myanmar on Monday in a general strike called to oppose the military coup and thousands of protesters gathered despite a threat ...
News
1 year ago

There have been daily protests and strikes by democracy supporters for about three weeks, often drawing hundreds of thousands of people across the diverse country.

In Yangon, hundreds of mostly young people congregated again on Friday but they largely melted away when police prepared to move in.

Small groups gathered in other places to chant slogans and confront lines of riot police who later fired stun grenades and guns into the air to send people scattering.

"One house let me in to hide," journalist Thu Zar told Reuters from the scene. "I can't leave yet as the police are very near and firing into the air."

A short time earlier, several people were detained, witnesses said, among them a Japanese journalist, a colleague said.

Domestic media and witnesses reported a similar situation in Mandalay where police also fired rubber bullets. It was not clear how the wounded man in the photograph was hurt.

Security forces have been more restrained than they were during earlier bouts of protest in the course of nearly half a century of military rule.

The army has promised a new election but has not set a date. A vote is not expected until after a one-year state of emergency the military imposed when it seized power.

Suu Kyi, 75, has been detained incommunicado in the capital, Naypyitaw, but her party and the throngs of protesters say its November election victory must be respected and the junta must hand back power.

Facebook on Sunday deleted the main page of the Myanmar military under it standards prohibiting the incitement of violence, the company said, a day ...
News
1 year ago

The daughter of Myanmar's independence hero spent nearly 15 years under house arrest for her efforts to end military rule. She now faces charges of illegally importing six walkie-talkie radios and of violating a natural disaster law by breaching coronavirus protocols.

A lawyer for her complained he was not able to prepare properly for her next hearing, on Monday.

"Even if I get to represent Aung San Suu Kyi I need to prepare for the documents and questions to be asked in court on March 1," Khin Maung Zaw told reporters in Naypyitaw.

"I need instructions from her on how to conduct our defence at the court ... I'm concerned that there will be a loss of rights to access to justice and access to legal counsel."

The spokesman for the ruling military council did not respond to a telephone call seeking comment.

The crisis raises the prospect of growing international isolation and investor jitters compounding difficulties for an economy already weighed down by the coronavirus.

The World Bank has halted payments to projects in Myanmar on withdrawal requests made after the coup, the bank said in a letter to the finance ministry seen by Reuters.

Britain, the US and others have called for Suu Kyi's release and the restoration of democracy and have imposed limited sanctions aimed at the junta and its business links.

US Secretary of State Antony Blinken said in a Sunday night Twitter post that the United States would continue to "take firm action" against ...
News
1 year ago

China's foreign ministry on Wednesday rejected the suggestion that it supported or gave tacit consent to Monday's military coup in neighbouring ...
News
1 year ago

The Myanmar leader, who established that country’s first civilian government in half a century, has been overthrown
World
1 year ago