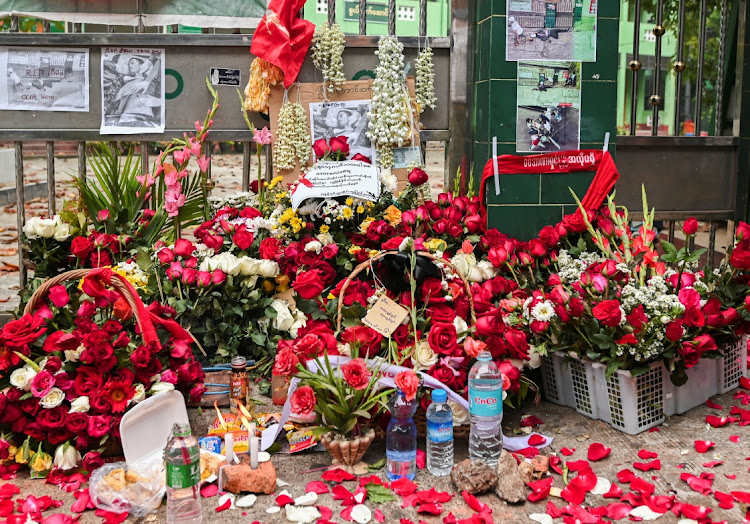 Flowers are seen placed at a memorial site where a man was shot dead yesterday while police were trying to disperse an anti-coup demonstration in Yangon, Myanmar, March 1, 2021.
Image: REUTERS/Stringer

Protesters marched in Myanmar on Monday in defiance of a crackdown by security forces that killed at least 18 people a day earlier, as calls grew for a more united international response after the worst violence since a coup one month ago.

Clashes took place in various parts of the country on Sunday and police opened fire on crowds in the biggest city of Yangon, after teargas and warning shots failed to clear protesters demanding the restoration of Aung San Suu Kyi's government. Police with water cannon and military vehicles were mobilised at protest hotspots in Yangon on Monday, while demonstrators marched in Kale, in northwest Myanmar, holding up pictures of Suu Kyi and chanting “democracy, our cause, our cause”.

Live video on Facebook showed a small crowd in hard hats gathered across a street in Lashio, Shan State, chanting slogans as police marched towards them.

“It has been one month since the coup. They cracked down on us with shootings yesterday. We will come out today again,” prominent protest leader Ei Thinzar Maung posted on Facebook.

Myanmar has been in chaos since the army seized power and detained elected leader Suu Kyi and much of her National League for Democracy (NLD) party leadership on Feb. 1, alleging fraud in a November election her party won in a landslide.

Having not been seen in public since her detention, Suu Kyi has a court hearing scheduled for Monday. She has been charged with illegally importing six walkie-talkie radios and of violating a natural disaster law by breaching coronavirus protocols.

The coup, which brought a halt to tentative steps towards democracy after nearly 50 years of military rule, has drawn hundreds of thousands of demonstrators onto the streets and the condemnation of Western countries.

Myanmar police fired on protesters on Sunday in the bloodiest day of weeks of demonstrations against a military coup and at least seven people were ...
News
1 year ago

US Secretary of state Antony Blinken condemned what he called “abhorrent violence” by security forces, while Canada's foreign minister, Marc Garneau, said the military's use of lethal force against its own people “appalling”. Both called for a united response.

Tom Andrews, the United Nations special rapporteur on human rights in Myanmar said it was clear the junta's assault would continue so the international community should ratchet up its response.

He proposed a global arms embargo, more sanctions from more countries on those behind the coup, sanctions on the military's businesses and a U.N Security Council referral to the International Criminal Court.

“Words of condemnation are welcome but insufficient. We must act,” Andrews said in a statement.

“The nightmare in Myanmar that is unfolding before our eyes will get worse. The world must act.”

People marked the deaths of demonstrators with red and white roses, circling with yellow, white and pink flowers the spot in front of a school where one protester was killed.

Small memorials were held for the victims, with candles lit in front of homes late on Sunday.

'WE WILL NEVER FORGIVE YOU'

Some protesters called on Monday for destruction of surveillance cameras used by authorities, and shared pepper spray recipes on social media.

Others made metal shields for those on the front lines, who took on police and soldiers in full battle gear. Some of the security forces belonged to units notorious for tough crackdowns on ethnic rebel groups.

Along one road in Yangon, demonstrators taped to the ground hundreds of pictures of junta leader Min Aung Hlaing, bearing the words “shame on you, dictator, we will never forgive you”.

A committee representing lawmakers who won seats in the November election said at least 26 people were killed in the violence on Sunday, which Reuters was unable to verify.

“The excessive use of force and other violations committed by the military junta are being recorded and they will be held accountable,” it said.

The military has not commented on Sunday's violence and police and military spokespersons did not answer calls.

In a post dated February 28, the state-run Global New Light of Myanmar warned “severe action will be inevitably taken” against “anarchic mobs” that the military could not ignore, despite having previously shown restraint.

The Assistance Association for Political Prisoners said at least 270 people were detained on Sunday, from a total 1,132 it said had been arrested, charged or sentenced since the coup.

Some witnesses said they saw people beaten by police before being taken away on Sunday.

US Secretary of state Blinken on Sunday said the US stood firmly with the people of Myanmar.

"(We) encourage all countries to speak with one voice in support of their will,” he said on Twitter.

Defiance of the coup has emerged not just on the streets but more broadly in the civil service, municipal administration, the judiciary, the education and health sectors and the media.

While some Western countries have imposed limited sanctions, the generals have traditionally shrugged off diplomatic pressure. They have promised to hold a new election but not set a date.