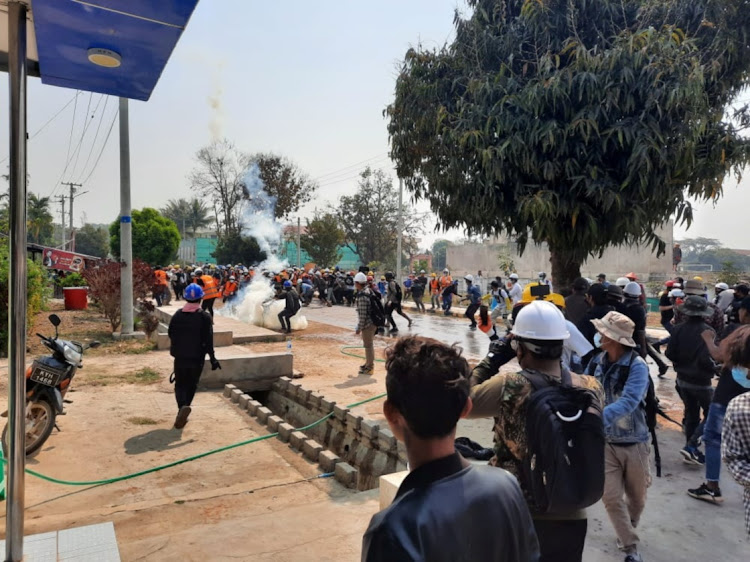 Myanmar security forces quickly snuffed out sporadic anti-junta protests on Tuesday after hundreds of young activists who had been trapped overnight in a district of its biggest city Yangon were able to get out.

Western powers and the United Nations had called on Myanmar's military rulers to allow the youngsters to leave after fears for their safety as troops moved in.

The army takeover and arrest of elected leader Aung San Suu Kyi on Feb. 1 has brought the Southeast Asian nation to a near-standstill. Daily protests are being staged across the country, and security forces are cracking down harshly.

More than 60 protesters have been killed and over 1,800 detained, an advocacy group said.

Scattered protests were held in Yangon and other towns across Myanmar on Tuesday but were quickly broken up by security forces using teargas and stun grenades. At least two people were wounded, one by a gunshot, in the town of Mohnyin in the north, local media said.

Tens of thousands of people came out in Myanmar on Sunday in one of the biggest days of protest against last month's coup despite overnight raids by ...
News
3 months ago

Several hundred people gathered in Sydney on Saturday to protest against last month's military coup in Myanmar and urged the Australian government to ...
News
3 months ago

Thousands of people defied a night time curfew on Monday to take to the streets of Yangon in support of the youths in the Sanchaung district, where they had been holding a daily protest against the coup.

Police firing guns and using stun grenades announced on Monday they would check houses for anyone from outside the district and said they would punish anyone caught hiding them.

Youth activist Shar Ya Mone said she had been in a building with about 15 to 20 others, but had now been able to go home.

“There were many free car rides and people welcoming the protesters,” Shar Ya Mone said by telephone.

She said she would keep demonstrating “until the dictatorship ends.”

Another protester posted on social media that they had been able to leave the area at around 5am after security forces pulled out.

UN Secretary-General Antonio Guterres had called for “maximum restraint” and the safe release of all protesters without violence or arrests, a call echoed by the US and British embassies in Myanmar.

An advocacy rights group said about 50 people had been arrested in Sanchaung after police searched houses, though checks were still being made.

A junta spokesperson did not answer calls requesting comment.

State television MRTV said earlier: “The government's patience has run out and while trying to minimise casualties in stopping riots, most people seek complete stability (and) are calling for more effective measures against riots.”

The US criticised the junta after an announcement on Monday that five independent media companies had been stripped of their licences. The five — Mizzima, Myanmar Now, 7-Day, DVB and Khit Thit Media — have been active in covering protests against the coup.

“We have very strongly condemned the junta for the, in many cases, violent crackdowns on those peacefully taking to the streets and on those who are just doing their jobs, including independent journalists who have been swept up,” State Department spokesperson Ned Price said.

The Myanmar military has brushed off condemnation of its actions, as it has in past periods of army rule when outbreaks of protest were bloodily repressed.

This time it is also under pressure from a civil disobedience movement that has crippled government business and from strikes at banks, factories and shops that have shut much of Yangon this week.

In a diplomatic blow to the junta, Myanmar's ambassador in Britain followed its UN representative in calling on Monday for the release of Suu Kyi, drawing praise from British foreign minister Dominic Raab.

Britain, the US and some other Western countries have imposed limited sanctions on the junta.

The European Union is preparing to widen its sanctions to target army-run businesses, according to diplomats and two internal documents seen by Reuters.