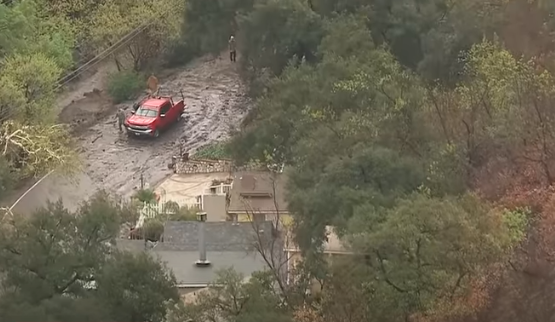 A mudslide swept the hillside in the Silverado Canyon area on Wednesday, but no injuries were reported.
Image: screengrab form Fox 11.

Mudslides that tore through a Southern California canyon on Wednesday, unleashed by heavy winter rains, trapped four people in their homes and badly damaged houses and cars in a community already scarred by December wildfires.

The torrent of mud marked the latest natural disaster to hit Silverado Canyon in Orange County, home to an eclectic mix of residents including artists and ranchers who live miles away from suburban sprawl up a single winding road.

“The mud/debris flow this morning caused damage to nine vehicles (and) 6-7 homes had mud flow through them,” the Orange County Sheriff's Department said on Twitter, adding in a second tweet: “Four people trapped in their homes were assisted out by firefighters.”

The sheriff's department ordered residents of Silverado Canyon, along with neighbouring Modjeska and Williams canyons, to evacuate their homes. Temporary shelters were set up at a nearby high school.

No deaths or injuries had been reported as of late Tuesday afternoon, some 12 hours after the mud and debris came down in the early morning hours.

"(Orange County) Public Works will send building inspectors out to determine the extent of damage once it’s safe to do so,” the sheriff's department said.

Some 3 feet (0.9m) of mud and debris covered Silverado Canyon Road, the main route used to access the community, and images on local TV showed wrecked cars piled on top of one another.

Much of the mud came down on hillsides left scorched and barren by a fierce wildfire that broke out in the canyon in early December.

The so-called Bond Fire, stoked by dry Santa Ana winds, prompted the evacuation of some 25,000 residents, destroyed 31 structures and blackened more than 7,300 acres (2,955 hectares) before it could be contained.

Two firefighters were hurt battling that blaze, one of dozens of major wildfires to burn across California during an intense fire season.

The mud/debris flow this morning caused damage to nine vehicles on Anderson Way & Silverado Canyon. 6-7 homes had mud flow through them. OC Public Works will send building inspectors out to determine the extent of damage once it’s safe to do so. >>> pic.twitter.com/5gMn8ljWT6