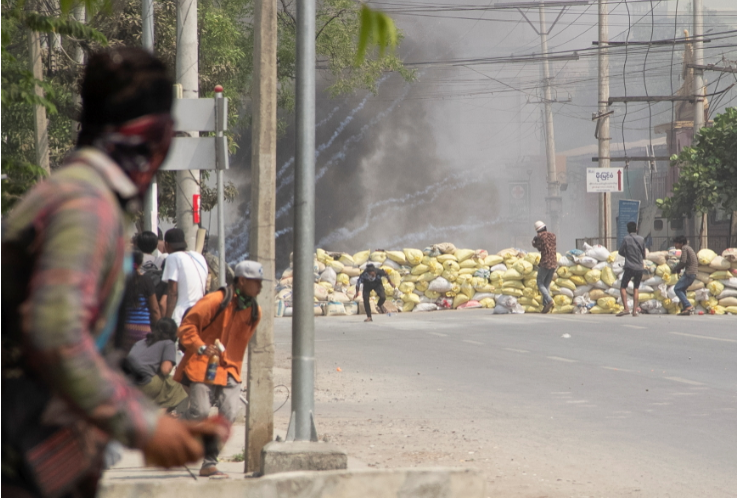 Demonstrators take cover behind a barricade during an anti-coup protest in Mandalay, Myanmar on March 15 2021.
Image: REUTERS/Stringer REFILE -QUALITY REPEAT

Myanmar security forces fired on pro-democracy demonstrators on Monday, killing six people, media and witnesses said, a day after dozens of protesters were shot dead and attackers torched several Chinese-financed factories in the city of Yangon.

Supporters of detained democratic leader Aung San Suu Kyi marched again, including in the second city of Mandalay and in the central towns of Myingyan and Aunglan, where police opened fire, witnesses and media reported.

The Myanmar Now media outlet reported three people were killed in Myingyan and two in Aunglan, while a journalist in Mandalay said one person was shot dead there after a big protest had passed off peacefully.

The protesters took to the streets in defiance of the authorities, whose escalating use of violence resulted in dozens being killed on Sunday in the bloodiest day since the Feb. 1 coup that overthrew Suu Kyi.

Sunday's arson attacks prompted China's strongest comments yet on the turmoil gripping its Southeast Asian neighbour, where many people see Beijing as supportive of the coup.

China's Global Times newspaper said 32 Chinese-invested factories were "vandalised in vicious attacks" that caused damage worth $37 million and injuries to two Chinese employees, while its embassy urged Myanmar's generals to stop the violence.

"We wish that Myanmar's authorities can take further relevant and effective measures to guarantee the security of the lives and assets of Chinese companies and personnel," foreign ministry spokesman Zhao Lijian said in Beijing.

Japan, which has long competed for influence in Myanmar with China, said it was monitoring the situation and considering how to respond in terms of economic cooperation.

The worst of Sunday's bloodshed took place in the Yangon suburb of Hlaingthaya, where security forces killed at least 37 protesters after the factory attacks, said a local doctor, who declined to be identified.

At least 16 people were killed in other places, rights group Assistance Association for Political Prisoners (AAPP) said, as well as one policeman.

The deaths bring the toll from the protests to about 140, based on a tally by the AAPP and the latest reports.

A junta spokesman did not answer calls requesting comment.

In an apparent bid to suppress news of the turmoil, telecoms service providers were ordered to block all mobile data nationwide, two sources with knowledge of the matter said. Telecom Telenor said in a statement "mobile internet was unavailable".

The army said it took power after its accusations of fraud in a Nov. 8 election won by Suu Kyi's National League for Democracy (NLD) were rejected by the electoral commission. It has promised to hold a new election, but has not set a date.

A three-year-old girl was rescued from a collapsed building in the western Turkish city of Izmir on Monday, nearly three days after a powerful ...
News
6 months ago

Suu Kyi, 75, has been detained since the coup and faces various charges, including illegally importing walkie-talkie radios and infringing coronavirus protocols. Last week, a charge related to accepting illegal payments was added to the list.

She was due to face another virtual court hearing on Monday but her lawyer, Khin Maung Zaw, told Reuters the session could not go ahead because the internet was down. The next hearing will be on March 24, he said.

Khin Maung Zaw also said authorities had informed him the detained Nobel laureate would only be permitted to be represented by two junior lawyers.

Western countries have called for Suu Kyi's release and condemned the violence and Asian neighbours have offered to help resolve the crisis, but Myanmar has a long record of rejecting outside intervention.

Tom Andrews, the United Nations human rights investigator on Myanmar, appealed for U.N. member states to cut the supply of cash and weapons to the military.

The International Labour Organization said trade unionists have been arrested and harassed in door-to-door searches while others are in hiding. The International Trade Union Confederation reported widespread restrictions on workers' rights since the coup.

Anti-China sentiment has risen since the coup, fuelled by Beijing's muted criticism of the takeover compared with Western condemnation. But protest leader Thinzar Shunlei Yi said Myanmar people did not hate their Chinese neighbours though their rulers had to understand the outrage felt over their stand.

"Chinese government must stop supporting coup council if they actually care about Sino-Myanmar relations and to protect their businesses," she said on Twitter.

Tom Andrews, the United Nations human rights investigator on Myanmar, appealed for U.N. member states to cut the supply of cash and weapons to the military.

The International Labour Organisation said trade unionists have been arrested and harassed in door-to-door searches while others are in hiding. The International Trade Union Confederation reported widespread restrictions on workers' rights since the coup.

Security forces killed at least 14 protesters in the poor, industrial Hlaingthaya suburb of Myanmar's main city on Sunday after Chinese-financed ...
News
1 month ago

Myanmar security forces quickly snuffed out sporadic anti-junta protests on Tuesday after hundreds of young activists who had been trapped overnight ...
News
2 months ago

Several hundred people gathered in Sydney on Saturday to protest against last month's military coup in Myanmar and urged the Australian government to ...
News
2 months ago
Next Article