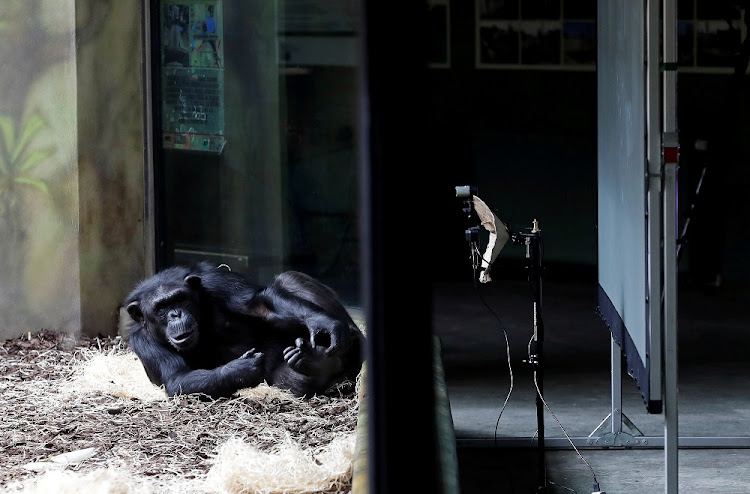 A chimpanzee rests in front of a giant screen inside its enclosure at Dvur Kralove Zoo, where a screen broadcasting fellow apes from Brno zoo has been installed as part of an enrichment project for chimpanzees amid zoo closures due to the coronavirus disease (Covid-19) pandemic, in Dvur Kralove nad Labem, Czech Republic, March 16, 2021.
Image: REUTERS/David W Cerny

We humans may be tiring of video calls, Zoom birthdays and streamed performances, but the chimps at two Czech zoos are just starting to enjoy their new live online link-up.

To make up for the lack of interaction with visitors since the attractions closed in December under Covid-19 restrictions, the chimpanzees at Safari Park Dvur Kralove and the troop at a zoo in Brno, 150km away, can now watch one another's daily lives on giant screens.

There are no mute buttons disasters as the sound is off, but there has already been plenty of interest in what the distant cousins are up to since the project got under way last week.

“At the beginning they approached the screen with defensive or threatening gestures, there was interaction,” said Gabriela Linhartova, ape keeper at Dvur Kralove, 135km east of Prague.

“It has since moved into the mode of 'I am in the movies' or 'I am watching TV'. When they see some tense situations, it gets them up off the couch, like us when we watch a live sport event.”

The chimpanzees have also adopted other human behaviours such as grabbing goodies like nuts to chew on while watching the action.

The video conferences, also aired on the safari park's website, will run daily from 8am until 4pm until the end of March when keepers will evaluate whether they should continue.