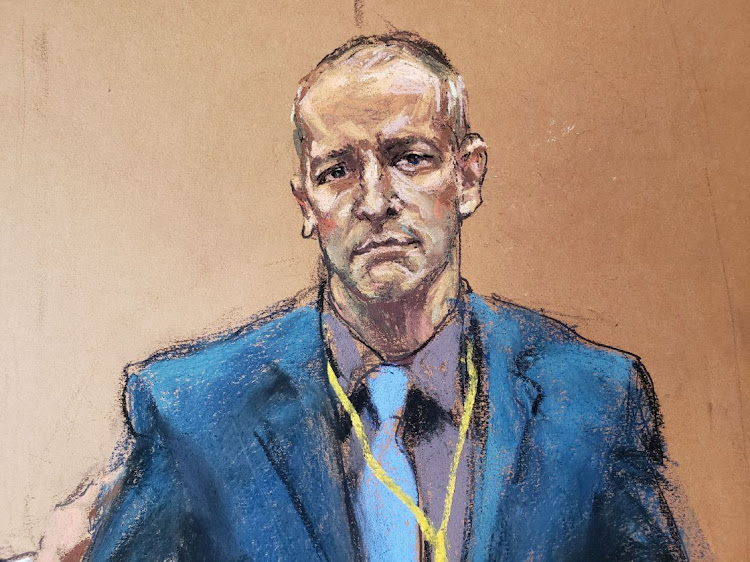 Derek Chauvin, the former Minneapolis police officer facing murder charges in the death of George Floyd, is introduced to potential jurors during jury selection in his trial in Minneapolis, Minnesota, US, March 15, 2021 in this courtroom sketch from a video feed of the proceedings.
Image: REUTERS/Jane Rosenberg/File Photo

Two jurors seated in the trial of Derek Chauvin, the former Minneapolis police officer facing murder charges over his arrest of George Floyd, were dismissed on Wednesday after they said news of a $27 million settlement with Floyd's family meant they could no longer be impartial.

Hennepin County District Judge Peter Cahill had set aside three weeks for jury selection, beginning last week, and was back down to seven seated jurors after the two dismissals. Two new jurors were seated later on Wednesday: a Black man and a multiracial woman, both in their 40s, according to the court.

“We're back to where we were this morning but it's better than being behind,” Cahill said shortly before recessing for the day.

The judge in the trial of Derek Chauvin, the former Minneapolis police officer charged with murder in the arrest of George Floyd, said on Monday it ...
News
1 year ago

Some of the other seated jurors, who have been promised anonymity by the judge for the trial's duration, said they had seen headlines about the settlement but were able to assure the court it would not influence them.

Chauvin's lead lawyer, Eric Nelson, has complained to the court that publicity around the settlement makes it harder to seat a jury that can be impartial.

All potential jurors so far have told the court they know who Chauvin is and almost all have seen video of the white police officer with his knee on Floyd's neck as Floyd, a 46-year-old Black man, begged for his life. The case sparked global protests against police brutality and racism.

Chauvin, 44, has pleaded not guilty to charges brought by the Minnesota attorney-general's office of second-degree murder, third-degree murder and manslaughter, and has said he correctly followed his police training. He faces up to 40 years in prison if convicted on the most serious charge.

“You have elected officials — the governor, the mayor — making incredibly prejudicial statements about my client, this case,” Nelson told the court on Tuesday. “You have the city settling a civil lawsuit for a record amount of money. And the pretrial publicity is just so concerning.”

He has asked the judge to revisit the defence's earlier request to delay and move the trial to another county, which Cahill has said he will consider and hoped to issue his ruling on Friday.

Cahill agreed with Nelson's request to recall the seven jurors already seated to see if the settlement news might bias them, and they appeared one by one by videoconference on Wednesday morning.

Cahill said earlier news articles, including some reporting that Chauvin had agreed to plead guilty to federal charges last year, were more “problematic” than the settlement news.

Prosecutors oppose Nelson's efforts to move the trial or dismiss jurors who heard about the settlement.

“I think that this $27 million settlement has been frankly overblown,” Steve Schleicher, a lawyer for the prosecution, told the court, saying many jurors interviewed since had shown no knowledge of the settlement.

The court plans to have opening arguments begin on March 29.