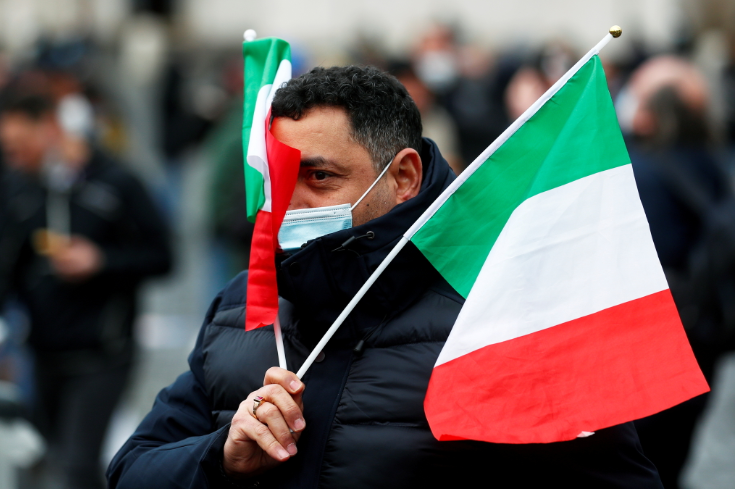 Since Italy's outbreak began 13 months ago schools have closed and re-opened at various times depending on age groups and local infection levels, but overall there has been less face-to-face schooling than in most other European countries.
Image: REUTERS/Guglielmo Mangiapane

Thousands of Italian parents, children and teachers protested in squares up and down the country on Sunday against what they call the unnecessary closure of schools to try to curb Covid-19 infections.

The protests, the first of any significance against Mario Draghi's national unity government that took office last month, were held in more than 35 squares nationwide including Rome's Piazza del Popolo and Milan's central Piazza Duomo.

Demonstrators in Rome wore dunce's caps to indicate the impact of the closures on students' education, while in Milan pupils' messages and placards were propped against their school rucksacks placed on the ground.

Numbers at each venue were limited due to coronavirus restrictions on gatherings.

"Open schools, whatever it takes," read one placard held aloft by a child in Rome, in reference to Draghi's famous promise to save the euro when he was European Central Bank chief in 2012.

Most Italian schools for all ages have been closed since March 15, when Draghi ramped up efforts to control the virus, with students attending lessons online from home.

"We are asking for one thing: that our schools be given the status of essential public services and immediately reopened," the Rome arm of the "Open Schools" national network that organised the demonstrations said in a statement.

Since Italy's outbreak began 13 months ago schools have closed and re-opened at various times depending on age groups and local infection levels, but overall there has been less face-to-face schooling than in most other European countries.

The latest closures were the last straw for millions of parents forced to work from home or pay for child care.

The government says the closures are needed due to rising infection rates, and particularly the increasing prevalence of the variant first discovered in the UK, in which contagion is high among younger age groups.

Draghi promised on Friday that schools would be the first thing to reopen when current Covid restrictions are eased.

Scuffles broke out as anti-lockdown protesters marched through central London on Saturday, defying police warnings for them to stay away due to ...
News
7 months ago

A protest by beachgoers in Muizenberg, Cape Town, against the lockdown regulations has been met with mixed reactions on social media.
News
8 months ago

A demonstrator holds Italian flags during a protest held by business owners against the restrictive measures put in place to fight the coronavirus disease infections, in Rome, Italy, on January 25 2021.
Image: REUTERS/Guglielmo Mangiapane