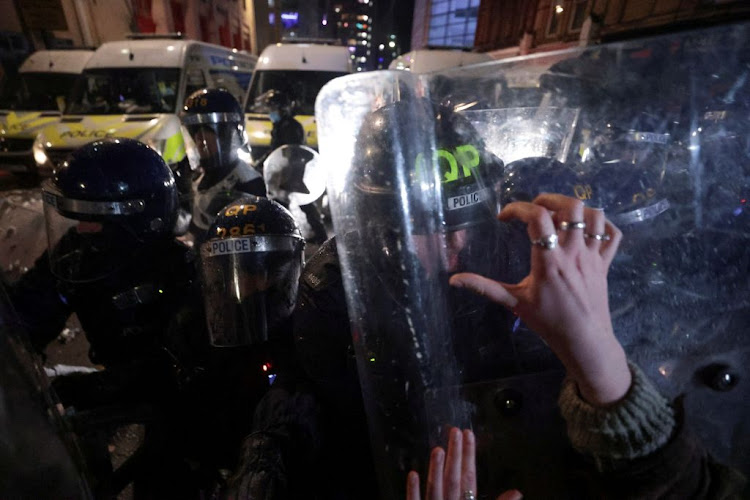 A demonstrator pushes back a police officer during a protest against a newly proposed policing bill, in Bristol, Britain, on March 26 2021.
Image: REUTERS/Hannah McKay

Ten people were arrested in the city of Bristol in southwest England on Friday after protests over a new policing bill turned violent with people throwing glass bottles and bricks at officers, police said in a statement.

Thousands of demonstrators converged on the city centre, ignoring Covid-19 restrictions, to protest against a government bill going through parliament that would give police new powers to restrict street protests.

“Ten people were arrested for offences including violent disorder, assaulting an emergency worker and possession of class A drugs,” the local Avon and Somerset Police superintendent Mark Runacres said in the statement.

“Items, including glass bottles and bricks were thrown at officers, fireworks were launched at our mounted section while one of our horses was also covered with paint,” Runacres added.

Items, including glass bottles and bricks were thrown at officers

“Three of those arrested were also detained in connection with the violent disorder which took place in Bristol on Sunday,” Runacres said.

The new policing bill would give police new powers to impose time and noise limits on street protests, which has angered activists, particularly since a heavy-handed police response to a London vigil for murder victim Sarah Everard on March 13 caused widespread outrage and criticism of the police.

A police officer has been charged with Everard's kidnap and murder, and the case has unleashed an outpouring of grief and rage over the issue of violence against women and girls.

The bill predated the Everard case and covers a wide range of policy areas as well as the policing of protests. However, the two became connected in many people's minds because, by coincidence, the bill was up for debate in parliament two days after the London vigil.

Scuffles broke out as anti-lockdown protesters marched through central London on Saturday, defying police warnings for them to stay away due to ...
News
1 year ago

London's police force must explain its actions against people gathered at a vigil to mark the killing of a 33-year-old woman, home office minister ...
News
1 year ago

Britain's most senior police officer has sought to reassure women it is safe to walk the streets of London at night after one of her officers was ...
News
1 year ago