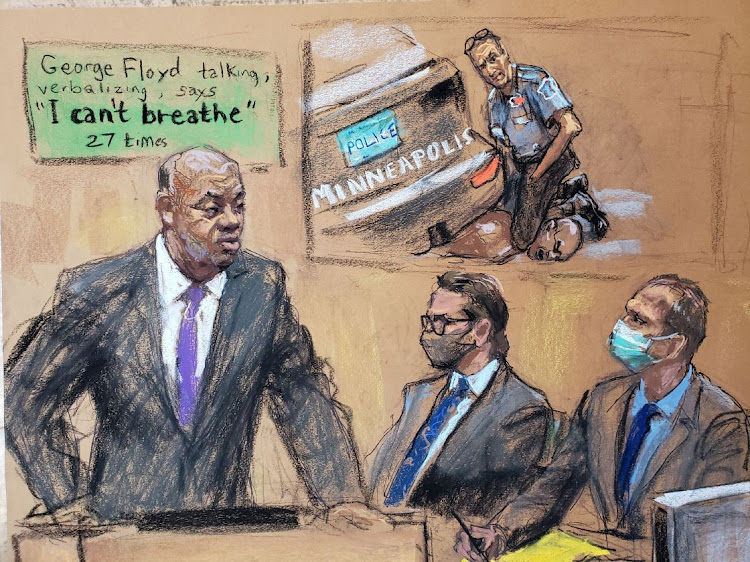 Lawyer Jerry W. Blackwell makes opening statements as defence attorney Eric Nelson sits beside former Minneapolis police officer Derek Chauvin during his trial for second-degree murder, third-degree murder and second-degree manslaughter in the death of George Floyd in Minneapolis, Minnesota, US, on March 29 2021 in this courtroom sketch from a video feed of the proceedings.
Image: REUTERS/Jane Rosenberg

Emotions ran high on Tuesday and Wednesday as witnesses testified about George Floyd’s last moments before he died at the hands of former Minneapolis police officer Derek Chauvin on May 25 2020.

Witnesses testified during the murder trial in Minnesota that Chauvin showed no remorse and appeared “comfortable” with his body weight on Floyd even when he begged for his life.

Chauvin and three other police officers arrested Floyd on suspicion he had used a fake $20 bill to buy cigarettes at Cup Foods. Floyd died shortly after his arrest under the knee of Chauvin who knelt on his neck for nearly 10 minutes.

From guilt to desperate pleas to save Floyd’s life, here are some emotional accounts from witnesses:

Darnella Frazier, the 18-year-old who captured the nearly 10-minute long video of Floyd’s last moments, told the jury Chauvin gave bystanders a “cold” stare and didn’t care when they asked him to remove his knee from Floyd’s neck.

The teenager said she sometimes apologises and feel guilty for not saving Floyd’s life though this is something Chauvin should have done. She said the incident reminds her that Floyd’s fate could have been any of the men in her life because they are all black.

“He didn’t care what we were saying, it didn’t change anything he was doing,” she said.

Donald Williams III, one of several witnesses who testified, recalled how he saw Floyd “slowly fading away like a fish in a bag” until he was lifeless. Williams called emergency services 911 and reported the murder.

Alyssa Funari, 18, another bystander, took another video showing onlookers shouting after Floyd stopped breathing. She also said she lives with guilt though she was helpless at the time.

“I felt like there wasn’t really anything I could do as a bystander. Technically, I could have done something but I really didn’t do anything physically,” she said.

Pleas to attempt to save Floyd's life denied

Genevieve Hansen, a firefighter said she was off duty when she witnessed Floyd’s death among the crowd.

CNN reported on Wednesday that she too told the court her pleas to attempt to save Floyd’s life were denied by officers who pushed back the crowd.

“I tried calm reasoning. I tried to be assertive, I pled and was desperate. I was desperate to give help,” she said. Hansen said she had noticed Floyd had become unconscious under the officer’s knee. She wanted to help him to the best of her ability, she said.

Christopher Martin, a cashier who reported Floyd, said he feels guilty about their exchange leading to Floyd’s death. Martin reported Floyd to the store manager after he tried to buy cigarettes using a counterfeit note.

Floyd was called in to resolve the matter but he refused, resulting in a call for police intervention.

Martin said he stopped working at Cup Foods because he didn’t feel safe.

A professional mixed martial arts fighter who witnessed the deadly arrest of George Floyd in Minneapolis last May is due to return to the stand on ...
News
1 month ago

Former Minneapolis policeman Derek Chauvin betrayed his badge by “grinding” his knee into George Floyd's neck during a deadly arrest last May, a ...
News
1 month ago

She had walked to Cup Foods hundreds of times before May 25, 2020. That day, Darnella Frazier made a cellphone video that convulsed a nation: a ...
News
1 month ago
Next Article