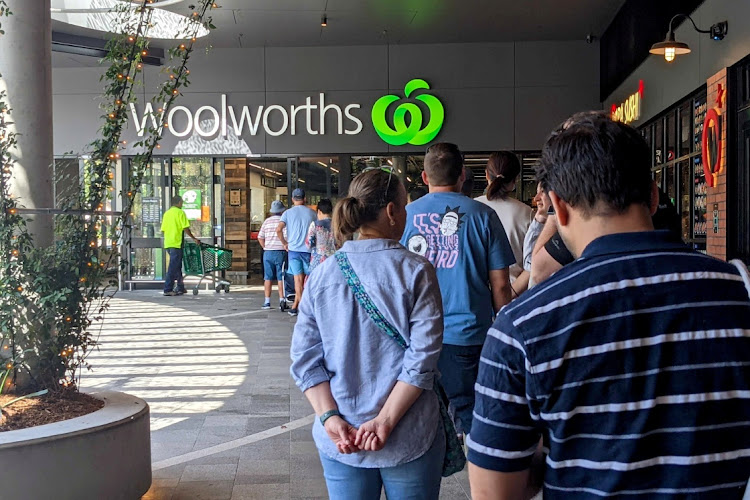 Shoppers line up outside a Woolworths store as greater Brisbane has been ordered into a snap three-day lockdown after four more cases of the coronavirus disease (Covid-19) emerged in the community, in Brisbane, Australia, March 29, 2021.
Image: AAP Image/Nick Gibbs via REUTERS / File photo

Australia will continue its inoculation programme with AstraZeneca PLC, health officials said on Saturday, after a blood clotting case raised concern about the safety of the vaccine.

A 44-year-old man was admitted to a Melbourne hospital with clotting, days after receiving the AstraZeneca vaccine, suffering serious thrombosis, a condition that prevents normal blood flow though the circulatory system.

“We have not been advised at this time by ATAGI or the TGA to pause the rollout of the AstraZeneca vaccine in Australia,” Australia's deputy chief medical officer, Michael Kidd, told a televised briefing Saturday afternoon.

Kidd said, however, that the blood clotting case is “likely” related to the vaccine.

“The risks of serious side effects remain very low, but safety is paramount and that is why TAGI and the TGA are continuing to do due diligence on this case,” Kidd said, adding that further announcements would come next week.

On Thursday, Britain identified 30 cases of rare blood clot events following use of the vaccine. Several nations, including Canada, France, Germany and Spain, limited its use after similar reports.

Possible complications with the rollout of the AstraZeneca vaccine could further slow the already delayed inoculation drive in Australia.

Australia launched mass vaccinations for its 25 million people in February, with most expected to receive the University of Oxford/AstraZeneca vaccine, as 50 million doses are being produced domestically by CSL Ltd.

The country has had troubles, however, rolling out the programme, missing a March target by about 3.3 million doses as states and the federal government bickered over the blame.

The troubles follow a year of significant success curbing the virus, with snap lockdowns, border closures and swift tracking limiting coronavirus infections to just under 29,300 infections, with 909 Covid-19 deaths.

On Saturday, Queensland state, the epicentre of the most recent small outbreak of the coronavirus, recorded one new infection, health officials said, but risks to the public were minimal as the victim had been in isolation for days.

Data was withheld from World Health Organisation investigators who travelled to China to research the origins of the coronavirus epidemic, WHO ...
News
1 week ago

For Carol Curry, manager of the Marina Holiday Park, 330 km (205 miles) north of Sydney, the Easter long weekend and school holidays were to be a big ...
News
1 week ago

AstraZeneca’s coronavirus vaccine received a major boost on Monday after data from a large trial showed it was safe and effective, potentially paving ...
News
2 weeks ago

AstraZeneca's Covid-19 vaccine performed better than expected in a major late-stage trial potentially paving the way for its emergency authorization ...
News
2 weeks ago

Australia said on Wednesday it will ask the European Union to release 1 million doses of a Covid-19 vaccine to help Papua New Guinea (PNG) battle a ...
News
3 weeks ago
Next Article