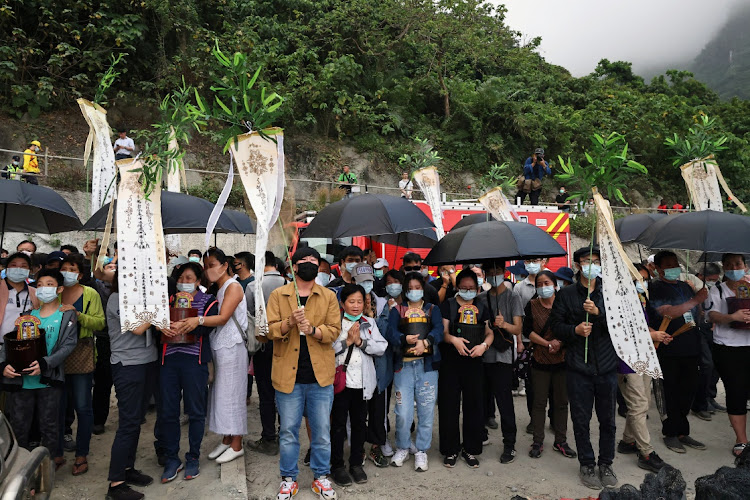 Relatives of the victims grieve near the site of the deadly accident, a day after a train derailed at a tunnel north of Hualien, Taiwan April 3, 2021. R
Image: EUTERS/Ann Wang

A Taiwan court on Saturday released on bond the manager of a construction site whose truck authorities believe to have caused a train accident that killed at least 50 people, but prosecutors vowed to appeal.

Friday's crash was Taiwan's worst rail accident in seven decades, when an express train hit the truck that had slid down a bank beside the track from the building site, whose manager is suspected of having failed to properly engage the brake.

The train, with almost 500 people aboard, was travelling from Taipei, the capital, to Taitung on the east coast when it derailed in a tunnel just north of the city of Hualien. Forty people are in hospital, from among the 178 reported injured.

Prosecutors had applied to a court to detain the manager on charges of causing death by negligence, a justice ministry official told reporters on Saturday.

But a court in Hualien released the manager, Lee Yi-hsiang, on a bond of T$500,000 ($17,525), though it restricted him from leaving Taiwan for eight months and said he had to stay in Hualien.

Taiwanese prosecutors have sought an arrest warrant for a construction site manager whose truck is believed to have caused a train accident that ...
News
6 months ago

The court said that while the truck's fall into the path of the train was possibly due to negligence, there was “no possibility of conspiracy”.

Yu Hsiu-duan, head of the Hualien prosecutors' office, said it would appeal against the decision.

“The court said there was no reason to keep him in custody,” she told reporters. “The court changed it to a surety of $T500,000.”

Lee's court-appointed lawyer declined to comment to reporters as he left the court.

Workers on Saturday began moving the train's rear portion, which was relatively unscathed as it had stopped outside the tunnel away from the accident spot.

However, other mangled sections remained in the tunnel, where fire department official Wu Liang-yun said more bodies were likely to be found.

“This shows the good side of Taiwanese society,” she said.

The government has ordered flags flown at half mast for three days in mourning, while the de facto French embassy in Taipei confirmed that one of its citizens had died in the crash.

Taiwan's foreign ministry said one US citizen was among the dead and another was missing.

In a rare sign of goodwill from China, which claims Taiwan as its own territory, President Xi Jinping expressed his condolences over the crash, state news agency Xinhua said.

The accident happened at the start of a long holiday weekend. The train was packed with tourists and residents going home for the traditional Tomb Sweeping Day to clean the graves of ancestors.

Taiwan has no domestic travel curbs as the Covid-19 pandemic is well under control, with only a handful of active cases in hospital.

Before the Hualien accident, Taiwan's worst train crash was in 1948, when 64 people are estimated to have died when a train caught fire.