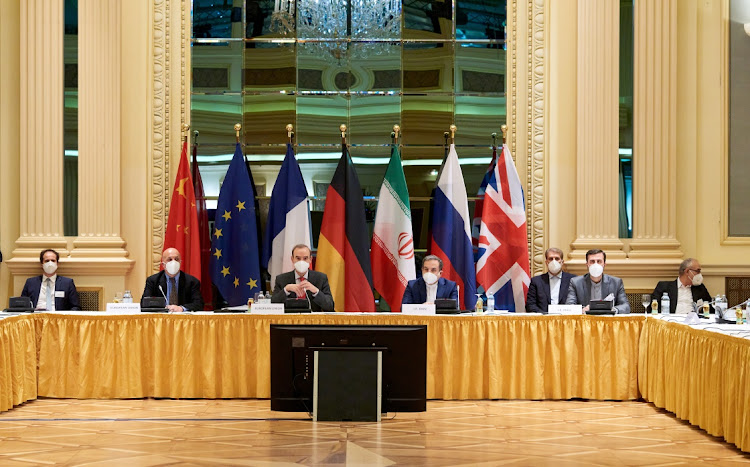 European External Action Service (EEAS) deputy secretary-general Enrique Mora and Iranian deputy at ministry of foreign affairs Abbas Araghchi wait for the start of a meeting of the JCPOA Joint Commission in Vienna, Austria, on April 6 2021.
Image: EU Delegation in Vienna/Handout via REUTERS

The US State Department on Thursday played down expectations for talks on how Washington and Tehran might resume compliance with the 2015 Iran nuclear deal and said the US envoy was likely to return home as the talks break for the weekend.

While echoing descriptions of the talks being held in Vienna as “constructive,” State Department spokesperson Ned Price told reporters “we would also, however, hasten to not allow expectations to outpace where we are”.

Diplomats from major powers have met separately with Iran and the US to discuss how to bring both back into compliance with the 2015 nuclear deal that Washington abandoned three years ago.

Neither the US nor Iran expect fast breakthroughs in the talks that began in Vienna on Tuesday, with European and other diplomats acting as intermediaries because Tehran rejects face-to-face talks for now.

US Special Envoy for Iran Rob Malley is expected to return home as the talks break for the weekend, Price said. The talks are chiefly among experts in two working groups that are discussing what sanctions the US might remove and what nuclear limits Iran might observe to revive the 2015 deal.

The remaining parties to the original nuclear deal — Iran, Britain, China, France, Germany and Russia — are expected to meet on Friday in a group called the Joint Commission that is chaired by the EU.

Price said the expert-level talks “may resume in the coming days, potentially next week”.

Iran will not stop its 20% uranium enrichment before the United States lifts all sanctions, Iranian state TV quoted an unnamed official as saying on ...
News
2 weeks ago

A cargo ship owned by an Israeli company was damaged by a missile in the Arabian Sea on Thursday in what was suspected to be an Iranian attack, an ...
News
2 weeks ago
Next Article