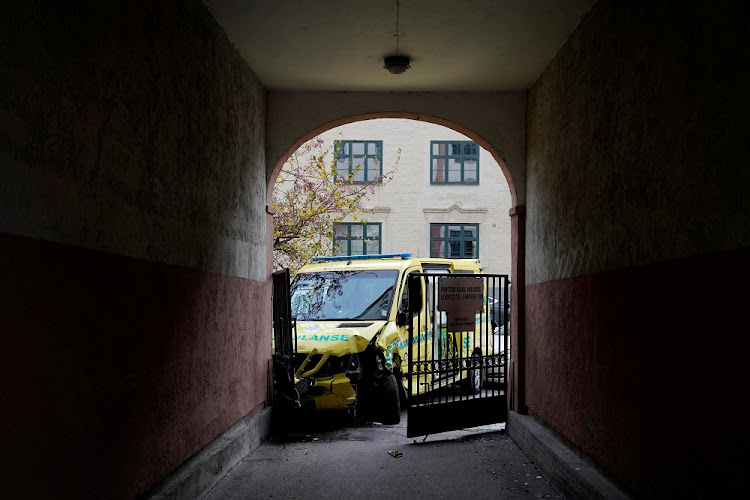 A damaged ambulance stands next to a building after an armed man who stole the vehicle was apprehended by police in Oslo, Norway, October 22, 2019.
Image: NTB Scanpix/Stian Lysberg Solum via REUTERS / File photo

A Norwegian man went on trial on Monday accused of hijacking an ambulance and attempting to run over and kill seven people, including two police officers and twin toddlers, during a high-speed chase through an Oslo neighbourhood in 2019.

Prosecutors said Nicolai Kaupang, 33, stole the vehicle at gunpoint from ambulance workers responding to a traffic accident in which he was involved, leading to a pursuit by police as he sought to escape.

Kaupang was carrying a significant quantity of illegal drugs, said police, who have ruled out any political motives.

He pleaded not guilty in court to the charges of attempted murder and of threatening two police officers. He pleaded guilty to charges of aggravated robbery, drug possession, making aggravated threats and carrying a firearm in a public place, according to news agency NTB.

Kaupang drove the ambulance on to a pavement at high speed, aiming it at pedestrians with an intent to kill, according to the charges, injuring an eight-month old girl when striking the buggy she shared with her twin brother.

Her injuries were not life threatening, and the boy escaped unhurt as the children's mother had almost managed to pull the carriage out of harm's way before the vehicle struck, prosecutors said.

The five other victims, including the children's mother and the police officers, had managed to dive for cover, narrowly avoiding the speeding ambulance, prosecutors said.

Kaupang hit several cars during the chase, which lasted about five minutes according to a timeline provided by prosecutors, and police fired multiple shots at the ambulance before it came to a standstill in a narrow street.

Under normal circumstances, the crimes he is accused of carry a prison term of up to 21 years. But prosecutors said they may also seek an additional custodial sentence, making his eventual release conditional on rehabilitation.