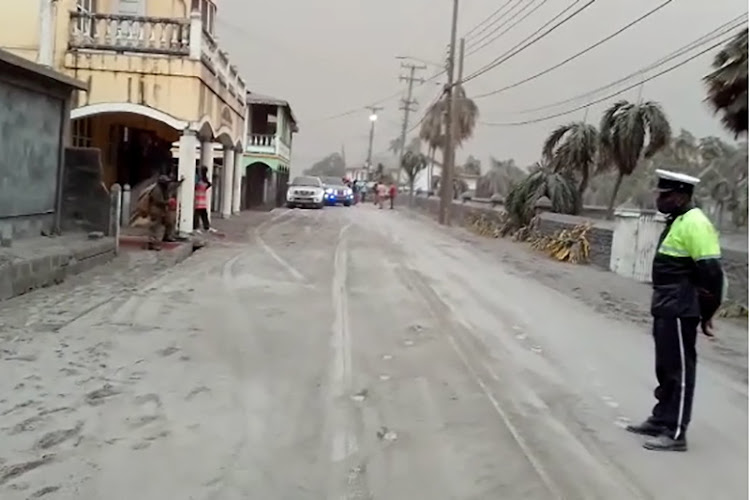 Ash covers roads a day after the La Soufriere volcano erupted after decades of inactivity, about 8km away in Georgetown, St Vincent and the Grenadines, on April 10 2021 in a still image from video.
Image: REUTERS/Robertson S. Henry

The Caribbean Saint Vincent island was hit by another explosive event from the La Soufriere volcano early on Sunday, triggering power cuts and water outages in some areas, while ash clouds began to blanket parts of the island of Barbados.

After decades of inactivity, the volcano erupted on Friday, spewing dark clouds of ash some 10km into the air and prompting an evacuation of thousands of people on the island. The volcano has continued to rumble and vent ash since then.

On Sunday morning, Saint Vincent's National Emergency Management Organisation (NEMO) said there was a huge power outage after “another explosive event” at the volcano. However, by 12pm ET (1600 GMT), power had been restored, residents said.

“Explosions and accompanying ashfall, of similar or larger magnitude, are likely to continue to occur over the next few days,” the University of the West Indies Seismic Research Centre said on Twitter.

St. Vincent and the Grenadines, which has a population of just over 100,000, has not experienced volcanic activity since 1979, when an eruption created about $100m in damages. An eruption by La Soufriere in 1902 killed more than 1,000 people. The name means “sulphur outlet” in French.

Finance minister Camillo Gonsalves said the government believes about 20,000 people will be internally displaced for about three to four months.

“Historically, the volcano keeps going intermittently for a couple months,” he said. “Most crops on island will be lost, and untold livestock.”

Some houses in the island have also collapsed due to the weight of the ash, Gonsalves added.

In the tourist island of Barbados, about 178km from Saint Vincent, the meteorological services agency said varying intensities of ash were impacting the island. Videos posted on social media showing a thin layer of ash coating cars and even the country's airport, which remains closed.

Rescuers searched for dozens of people missing in remote islands of southeast Indonesia on Tuesday while expecting more casualties in the aftermath ...
News
1 year ago

A fissure 500 to 750 meters long opened at the eruption site, spewing lava fountains up to 100 meters high, Bjarki Friis of the meteorological office ...
News
1 year ago