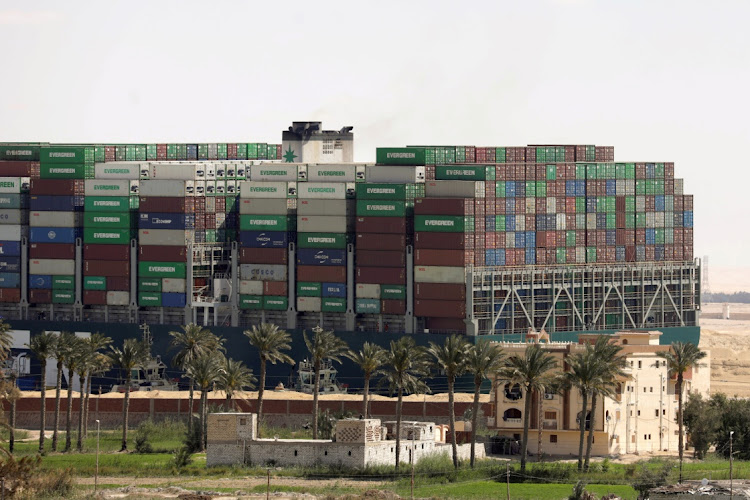 The container ship Ever Given after it was partially refloated, in the Suez Canal, Egypt, on March 29 2021.
Image: REUTERS/Mohamed Abd El Ghany

A ship that blocked the Suez Canal for almost a week in March is being held in the waterway as canal authorities pursue a $916m (R13.3bn) compensation claim against the ship's Japanese owner, one of the vessel's insurers and canal sources said on Tuesday.

The Ever Given container ship, owned by Shoei Kisen, has been in a lake separating two sections of the canal since it was dislodged on March 29, as the Suez Canal Authority (SCA) conducts investigations.

Two SCA sources, who declined to be named, told Reuters a court order had been issued for the ship to be held. Negotiations over the compensation claim were still taking place, according to one of the sources.

“Despite the magnitude of the claim, which was largely unsupported, the owners and their insurers have been negotiating in good faith with the SCA,” UK Club said in a statement.

Reinsurers are set to foot most of the bill for the grounding of the ship that halted traffic in the Suez Canal, industry sources said, with payouts ...
News
1 month ago

“On April 12, a carefully considered and generous offer was made to the SCA to settle their claim. We are disappointed by the SCA's subsequent decision to arrest the vessel today.”

Earlier on Tuesday Yumi Shinohara, deputy manager with owner Shoei Kisen's fleet management department, confirmed that the canal had made a compensation claim and that the ship had not been given clearance to leave, but gave no further details.

The decision to hold the ship could impact its cargo, said Jai Sharma, a lawyer at Clyde & Co. “I anticipate that there will be companies that are going to air freight cargo replacements,” he said.

There was no immediate comment from the SCA, but the authority's chairman Osama Rabie said on Egyptian TV last week that the Ever Given would not leave until the investigation was finished and compensation paid.

He said the canal had borne “great moral damage” as well as shipping fee losses and salvage operation costs. He has also said he hoped to settle matters amicably.

Results of the SCA's investigation were expected by the end of the week, according to SCA sources.

The Suez Canal Authority is considering expanding the southern section of the waterway where the container ship Ever Given became stranded, its ...
News
1 month ago

International supply chains were thrown into disarray when the 400-metre Ever Given ran aground in the canal on March 23, with 18,300 containers on board.

Specialist rescue teams took six days to free the vessel, delaying the passage of more than 400 ships and causing others to divert around Africa.

Industry sources told Reuters last week that reinsurers were set to foot most of the bill for the ship's grounding.

Asked about the SCA's claim, Sharma said: “It would seem surprising that the claim could be quantified so quickly with any accuracy.”

One maritime lawyer said that normally the ship owner would provide an agreed security that would allow the vessel and crew to continue on their way with a court setting a final award later. “Of course in this case, they are hoping for cash now,” he said.