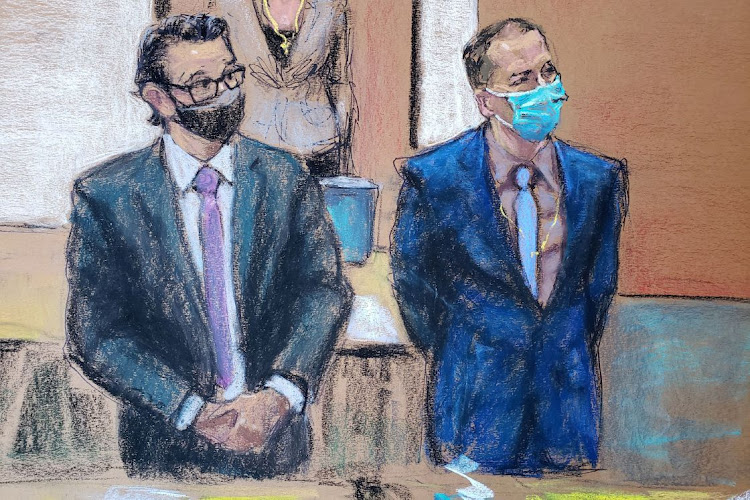 Former Minneapolis police officer Derek Chauvin and his defence attorney Eric Nelson on the 12th day of Chauvin's trial for second-degree murder, third-degree murder and second-degree manslaughter in the death of George Floyd in Minneapolis, Minnesota, US, on April 13 2021 in this courtroom sketch.
Image: REUTERS/Jane Rosenberg

Defence attorneys in the murder trial of Derek Chauvin on Tuesday called an expert witness who testified that the former Minneapolis police officer was justified and reasonable in his use of force during his arrest of George Floyd.

After 11 days of testimony by prosecution witnesses, Eric Nelson, lead attorney for Chauvin, called Barry Brodd, a private consultant in the use of force by law enforcement who said Chauvin was following his training during the encounter.

His testimony contradicted several prosecution witnesses, including the city police chief, who earlier in the trial said Chauvin had no justification for kneeling on the 46-year-old black man's neck for more than nine minutes.

Chauvin's defence team also sought to highlight Floyd's apparent history of drug abuse, laying groundwork to support its argument that he died of an overdose, rather than from lack of oxygen caused by Chauvin's actions as the prosecution contends.

Chauvin, who is white, has pleaded not guilty to murder and manslaughter charges stemming from the May 2020 incident, captured on bystander videos. The case prompted protests against racism and police brutality in cities in the US and around the world last year.

The judge in the trial of Derek Chauvin, the former Minneapolis policeman charged with George Floyd's deadly arrest last May, denied a defense ...
News
1 month ago

This week, local tensions surrounding the trial intensified when a young black man was fatally shot by a police officer during a traffic stop in nearby Brooklyn Center, Minnesota.

Many of the most dramatic moments on Tuesday came during the cross examination of Brodd. Prosecutor Steve Schleicher, challenging the claim that Chauvin was justified in his use of force, got Brodd to agree that Chauvin continued restraining Floyd even after the man had stopped resisting.

“By the time the defendant got off of Mr. Floyd, Mr. Floyd could not support his own head,” Schleicher said. Brodd agreed.

Brodd testified that a compliant person “would have both their hands in the small their back and just be resting comfortably.”

The first witness called by Chauvin's defence was Scott Creighton, a now-retired Minneapolis police officer who pulled over a car in which Floyd was a passenger in 2019, a year before his deadly encounter with Chauvin.

Nelson showed the jury a video taken by a body-worn camera during the traffic stop as Floyd became distressed when Creighton pointed a gun at him and ordered him out of a car.

“The passenger was unresponsive and noncompliant to my commands,” Creighton told the jury, describing Floyd as nervous and anxious. “I then had to reach in to him because I wanted to see his hands.” He repeatedly ordered Floyd to keep his hands on the dashboard.

During cross-examination, prosecutors asked Creighton whether Floyd died during the encounter.

“No, he did not,” the retired officer said, stating the obvious.

As the world follows the often-emotional testimony in the trial of Derek Chauvin, the former Minneapolis police officer accused of murdering George ...
News
1 month ago

Another witness was Michelle Moseng, a retired paramedic for Hennepin County Medical Center Emergency Medical Services, who told the jury that she checked Floyd's vital signs at a police station after the 2019 arrest. “It was quite hard to assess him,” she testified. “He was upset and confused.”

Moseng said that Floyd told her he consumed opioids because he “was addicted”.

In the current case, Shawanda Hill was in Floyd's SUV with him outside a food store where he allegedly had paid for cigarettes with a bogus $20 bill. She testified that Floyd soon fell asleep and she tried to wake him a couple of times with little success, bolstering the defence claim that Floyd was high on drugs during the deadly interaction with police.

Nelson also called Minneapolis Park Police officer Peter Chang to testify that when he arrived at the scene he grew concerned for the safety of the police officers who were there.

“There was a crowd,” he told the jury. “They were very aggressive towards the officers.”

Chauvin's defence has argued that bystanders who watched the incident unfold threatened the officers and that Chauvin may have been distracted by them.

Before testimony from defence witnesses began on Tuesday, prosecutors rested their case after finishing some procedural matters involving video footage from one of the officers' body cameras.

The Brooklyn Center, Minnesota, police chief and the officer who fatally shot Daunte Wright, a 20-year old Black man who struggled with police after ...
News
1 month ago

A US Army lieutenant filed a lawsuit against two Virginia police officers in federal court over what court papers say was a violent traffic stop, ...
News
1 month ago

The medical examiner who performed the autopsy on George Floyd after last May's deadly arrest explained how he concluded the death was a homicide at ...
News
1 month ago
Next Article