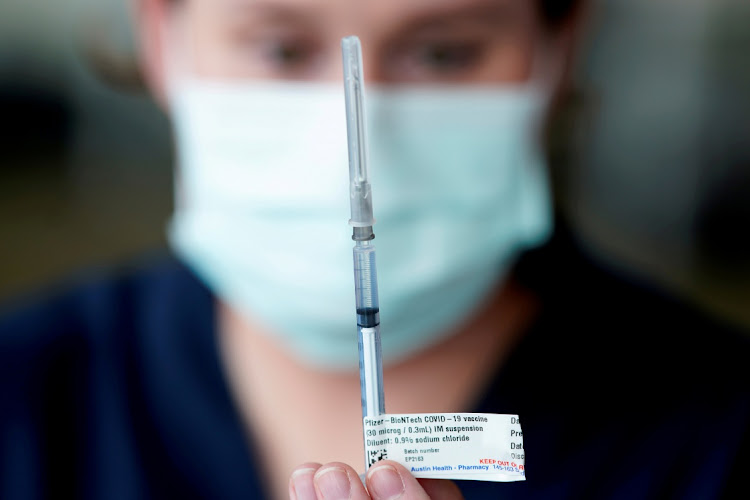 British and European regulators have stressed that the benefits of vaccination outweigh the risks.
Image: REUTERS/Sandra Sanders//File Photo/File Photo

There is a much higher risk of brain blood clots from Covid-19 infection than there is from vaccines against the disease, British researchers said on Thursday, after the rollout of inoculations was disrupted by reports of rare clots.

AstraZeneca and Johnson & Johnson have both seen very rare reports of cerebral venous sinus thrombosis (CVST) linked to their vaccines. On Wednesday, the US paused vaccinations using J&J's shot while a link with clots was investigated, with Denmark ditching AstraZeneca's shot over the issue.

British and European regulators have stressed that the benefits of vaccination outweigh the risks.

A study of 500,000 Covid-19 patients found CVST had occurred at a rate of 39 people out of a million following infection, researchers said. That compares with European Medicines Agency (EMA) figures showing that 5 in a million people reported CVST after getting AstraZeneca's shot.

The researchers said in a preprint study that the risk of CVST was 8-10 times higher following Covid-19 infection than it was from existing vaccines for the disease.

“The risk of having a (CVST) after Covid-19 appears to be substantially and significantly higher than it is after receiving the Oxford-AstraZeneca vaccine,” Maxime Taquet of Oxford's Department of Psychiatry told reporters.

The study was based on a US health database, and so did not accrue new data on the risk of clots from AstraZeneca's vaccine directly, as the shot is not being rolled out there.

Taquet said that the mortality rate from CVST was about 20% whether it occurred after COVID-19 infection or a vaccine, indicating the clots were the main risk factor.

Regulators had also observed low platelet levels in reports of vaccine side effects, but the researchers said data was limited on whether that was also the case in those reporting CVST after infection.

The researchers highlighted that Covid-19 was associated with more common clotting disorders than CVST, such as strokes, and that recent debate around vaccines had lost sight of how bad the disease itself could be.

“The importance of this finding is it brings it back to the fact this is a really horrible illness as a whole variety of effects including increased risk of (CVST)," John Geddes, director of NIHR Oxford Health Biomedical Research Centre.

The research team, from Oxford University, said they worked independently from the Oxford vaccine team which developed AstraZeneca's shot.

TOM EATON | As long as jabs aren’t from the West, they’re fine for the EFF

The EFF thinks we should get vaccines from Russia and China because they are ‘of better efficacy’. Really?!
Opinion & Analysis
1 year ago

They say procurement must be left to the state, adding that bankrolling jabs for those without medical aids is illegal
News
1 year ago