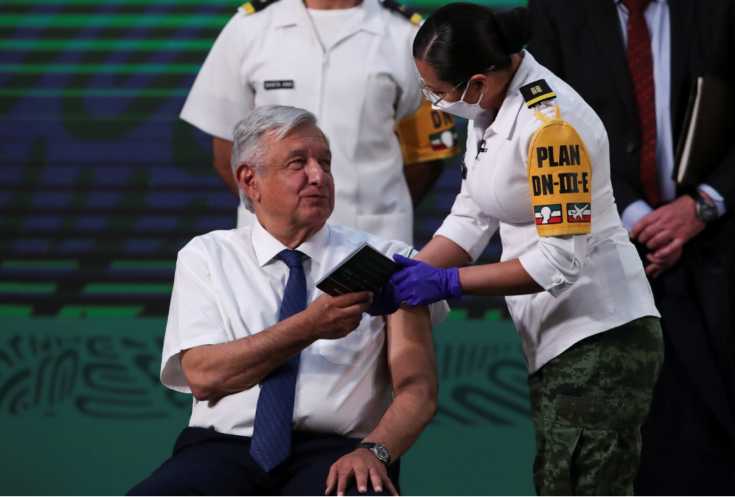 Mexico's President Andres Manuel Lopez Obrador holds a card of vaccination after receiving a dose of the AstraZeneca coronavirus diseasevaccine during a vaccination at the National Palace in Mexico City, Mexico on April 20 2021.
Image: REUTERS/Henry Romero

Mexican President Andres Manuel Lopez Obrador received the AstraZeneca shot against Covid-19 on Tuesday, urging trust in vaccines after several countries limited the use of AstraZeneca due to suspected links to rare blood clots.

Lopez Obrador, 67, has said the benefits of getting inoculated outweighed the risks of the low-cost shot, which is a core pillar of Mexico's vaccination strategy.

Ahead of rolling up his sleeve for the shot at the end of his regular daily news conference, Lopez Obrador said he wanted to encourage all older adults to also get their shots to be protected from the coronavirus.

"We're sure there is no risk, no danger, that there are no serious side effects," he said, without specifically naming AstraZeneca.

He added that his government is tracking vaccine studies being carried out worldwide.

Lopez Obrador said he would sit for 20 minutes after receiving the jab, as recommended by a healthcare worker who administered the shot to the president on live television and social media.

Mexico's health regulator said earlier this month that it did not plan to limit the use of the two-shot AstraZeneca vaccine, but was looking into information from Britain's vaccine advisory committee.

The committee has said an alternative to AstraZeneca should be given to people under 30 where possible.

Mexico began vaccinations late last year and has so far fully inoculated nearly 4 million people, most of whom are adults over 60, out of a total population of 126 million.

The US has put Johnson and Johnson in charge of a plant that ruined 15 million doses of its Covid-19 vaccine and has stopped British drugmaker ...
News
1 year ago

Criticism of the snail’s pace at which SA is rolling out Covid-19 vaccinations compared with its economic peers is unfair and misplaced, leading ...
News
1 year ago