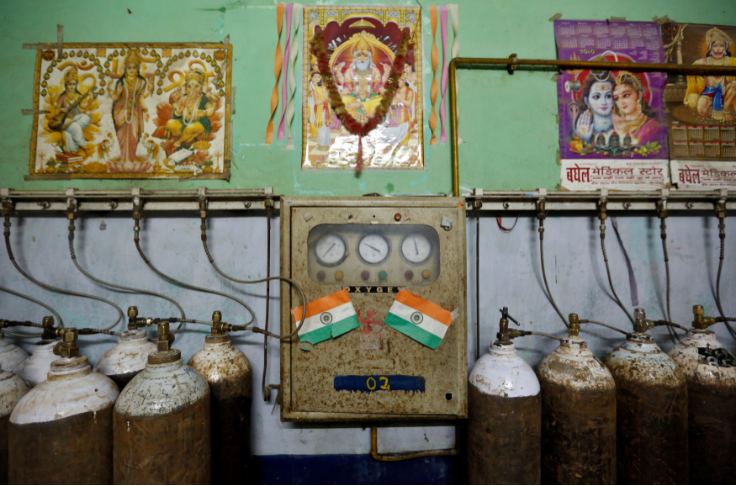 On Tuesday, hospitals in Delhi, the capital, said they had enough oxygen left for just another eight to 24 hours, while some private institutions had enough for only four or five.
Image: REUTERS/Cathal McNaughton

At least 22 patients died on Wednesday in a hospital in western India after a disruption to their oxygen supply caused by a leaking tank, the health minister said, as a nationwide surge in coronavirus cases soaks up supplies of the crucial gas.

The incident in the city of Nashik, one of India's worst-hit areas, happened after the tank of gas leaked, said Rajesh Tope, the health minister of Maharashtra, the richest state, where the city is located.

"Patients who were on ventilators at the hospital in Nashik have died," Tope said in televised remarks.

"The leakage was spotted at the tank supplying oxygen to these patients. The interrupted supply could be linked to the deaths of the patients in the hospital."

Only the United States had a slightly higher one-day rise of 297,430 cases in January, though its tally has since fallen sharply. India's 2,023 deaths were also its highest in the pandemic.

On Tuesday, hospitals in Delhi, the capital, said they had enough oxygen left for just another eight to 24 hours, while some private institutions had enough for only four or five.

The situation was so severe that some people had tried to loot an oxygen tanker, forcing authorities to beef up security, said the health minister of the neighbouring state of Haryana.

Television showed images of people with empty oxygen cylinders crowding refilling facilities as they scrambled to save stricken relatives in hospital.

"We were completely blocked out of supplies yesterday but by the end of the day we received some and it is helping us today," said Charu Sachdeva, an official at the state-run Rajiv Gandhi Cancer Institute & Research Centre in the capital.

In the northern city of Lucknow, one man said a hospital had asked him to arrange oxygen supplies for his uncle or take him away since it had run out.

Delhi, a city of 20 million people, recorded 28,395 new cases and 277 deaths on Tuesday, its highest tally since the pandemic began. Every third person tested for coronavirus proved positive.

About 80 of 142 hospitals in Delhi had no beds left for virus patients, government figures showed.

New Delhi businessman Saurabh Mittal said he called a hospital shown in a government database to have beds free, only to be told they were full up and could not take anyone.

"I told them there is online availability but they said the real-time data showed no beds," said Mittal, who had been trying to arrange treatment for a virus sufferer.

India faces a coronavirus "storm" overwhelming its health system, Prime Minister Narendra Modi said in a national address overnight, adding that authorities were working with states and private firms to deliver oxygen with "speed and sensitivity".

Delhi, like large parts of India, let its guard down when the virus seemed to be under control, allowing big gatherings such as weddings and festivals as daily infections fell to fewer than 1,000 during the winter, health experts said.

Indian authorities scrambled to shore up supplies of medical oxygen to hospitals in the capital, Delhi, on Wednesday as a fast-spreading second wave ...
News
1 year ago

Britain is adding India to its travel "red-list" after detecting 103 cases of a coronavirus variant first identified in the country, health minister ...
News
1 year ago