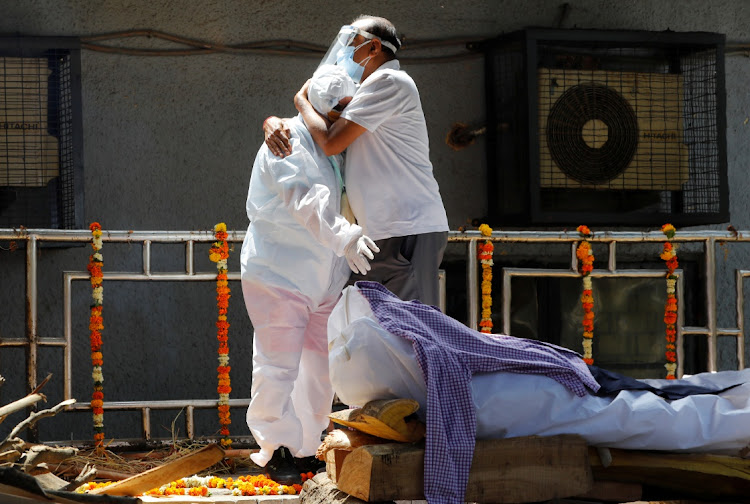 Relatives mourn a man, who died from Covid-19, next to his funeral pyre at a crematorium in New Delhi, India, on April 21 2021.
Image: REUTERS/Adnan Abidi

Indian authorities scrambled to shore up supplies of medical oxygen to hospitals in the capital, Delhi, on Wednesday as a fast-spreading second wave of coronavirus stretched medical infrastructure to breaking point, officials and doctors said.

India, the world's second most populous country, is reporting the world's highest number of new daily cases and approaching a peak of about 297,000 cases in one day that the US hit in January.

The latest date released by the health ministry showed there had been 295,041 new infections nationwide overnight and 2,023 deaths, India's highest in the pandemic.

Delhi's government hospitals reported they only had enough oxygen to last another eight to 24 hours while some private ones had enough for just four or five hours.

“We are facing huge problems in oxygen supply but somehow we are managing. Yesterday, it was very critical. We had only four to five hours oxygen in the evening,” said Ronit Kumar, head Biomedical Engineering at Fortis Escorts Heart Institute.

Replenishment came before dawn on Wednesday, with enough to last through the day, he said, adding they were pushing their suppliers. “Since they are also facing huge requirements, so I don't know. I have not got confirmation,” he said.

Britain is adding India to its travel "red-list" after detecting 103 cases of a coronavirus variant first identified in the country, health minister ...
News
1 year ago

Delhi, like large parts of India, lets its guard down when the virus seemed to be under control, allowing big gatherings such as weddings and festivals as daily infections fell to fewer than 1,000 during the winter, health experts said.

On Tuesday, the city of 20 million recorded 28,395 new cases and 277 deaths, its highest since the pandemic began. Every third person tested for coronavirus was found positive, the state government said, piling the pressure on health infrastructure.

Prime Minister Narendra Modi said India faced a coronavirus “storm” overwhelming its health system and the government was working with state governments and private companies to deliver oxygen with “speed and sensitivity”.

“The central and state governments as well as the private sector are together trying to ensure oxygen supplies to those in need. We are trying to increase oxygen production and supply across the country,” Modi said in a televised address on Tuesday evening.

A source at Indraprastha Apollo Hospital in New Delhi, a top private hospital, said staff had a “crazy night” as they ran short of oxygen but two tankers finally arrived after midnight. The hospital has 12 to 14 hours of oxygen left for 200 patients relying on it, the source added.

“We were hand to mouth but hoping the supply levels will increase from today,” said the hospital source, who is not authorised to speak to media.

Modi has faced accusations that his administration did not prepare for the second wave and instead allowed gatherings such as ritual bathing in the Ganges river and political rallies that he himself addressed to go ahead.

“I feel your pain, those who have lost loved ones,” he said in the Tuesday evening address.

People pleaded on social media for help arranging beds, oxygen supplies and the antiviral drug Remdevisir in Delhi and the most populous state of Uttar Pradesh, also in the north.

There were no beds for Covid-19 patients in about 80 of 142 hospitals in Delhi, according to government data.

Saurabh Mittal, a New Delhi-based businessman, who was trying to help someone get treatment said he called a hospital that a government database showed had beds free but the operator said they were full and could not take anyone.

“I told them there is online availability but they said the real-time data showed no beds,” Mittal said.

The world has the means to bring the global Covid-19 pandemic under control in the coming months, the head of the World Health Organisation (WHO) ...
News
1 year ago

Israel rescinded the mandatory wearing of face masks outdoors and fully reopened schools on Sunday in the latest return to relative normality, ...
News
1 year ago

The Serum Institute of India has fully refunded SA for 500,000 doses of the AstraZeneca Covid-19 vaccine which had not yet been delivered, health ...
News
1 year ago