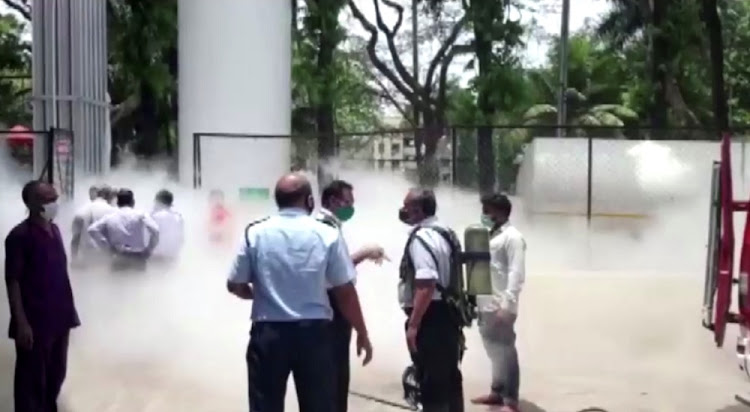 An oxygen tanker leaks at a hospital premises where Covid-19 patients died due to a lack of oxygen in Nashik, India, on April 21 2021 in this still image taken from video.
Image: ANI via REUTERS

India marked a new milestone in the Covid-19 pandemic on Thursday, reporting 314,835 new daily cases, the highest one-day tally anywhere, as its second wave and similar surges elsewhere raised new fears about the ability of health services to cope.

Hospitals across northern and western India, including the capital, New Delhi, have issued notices to say they have only a few hours of medical oxygen required to keep Covid-19 patients alive.

More than two-thirds of hospitals had no vacant beds, according to the Delhi government's online data base and doctors advised patients to stay at home.

“The situation is very critical,” Dr Kirit Gadhvi, president of the Medical Association in the western city of Ahmadabad said.

“Patients are struggling to get beds in Covid-19 hospitals. There is an especially acute shortage of oxygen.”

Krutika Kuppalli, assistant professor at the Division of Infectious Diseases, Medical University of South Carolina in the US, said on Twitter the crisis was leading to a collapse of the health-care system.

The previous record one-day rise in cases was held by the US, which had 297,430 new cases on one day in January, though its tally has since fallen sharply.

Television showed images of people with empty oxygen cylinders crowding refilling facilities in the most populous state of Uttar Pradesh as they scrambled to save relatives in hospital.

“We never thought a second wave would hit us so hard,” Kiran Mazumdar Shaw, the executive chairperson of Biocon & Biocon Biologics, an Indian health-care firm, wrote in the Economic Times.

Similar surges of infections elsewhere, in South America in particular, are threatening to overwhelm other health services.

India has launched a vaccination drive but only a tiny fraction of the population has had the shots.

Authorities have announced that vaccines will be available to anyone over the age of 18 from May 1 but India won't have enough shots for the 600 million people who will become eligible, experts say.

Health experts said India had let its guard down when the virus seemed to be under control during the winter, when new daily cases were about 10,000, and it lifted restrictions to allow big gatherings.

Prime Minister Narendra Modi's government has come in for criticism for holding packed political rallies for local elections and allowing a religious festival at which millions gathered.

On Thursday, despite the biggest public health emergency the country has faced in a generation, people were voting in the eastern state of West Bengal for a new state assembly in an election that Modi has been campaigning in.

“It's a festival of democracy and everyone is participating. You can see the queues,” said Krishna Kalyan, a candidate from Modi's ruling Bharatiya Janata Party.

Experts say new variants, in particular a “double mutant” variant that originated in India, are largely responsible for the new spikes in cases.

“The double mutant ... is considerably more infectious than the older strain of virus,” said Gautam Menon, a professor at Ashoka University.

Indian authorities scrambled to shore up supplies of medical oxygen to hospitals in the capital, Delhi, on Wednesday as a fast-spreading second wave ...
News
1 year ago

At least 22 patients died on Wednesday in a hospital in western India after a disruption to their oxygen supply caused by a leaking tank, the health ...
News
1 year ago

Covid-19 on the rise in 3 provinces, caution advised as school holidays loom

An upsurge in Covid-19 cases in the Northern Cape, North West and Free State has been flagged by the NICD.
News
1 year ago