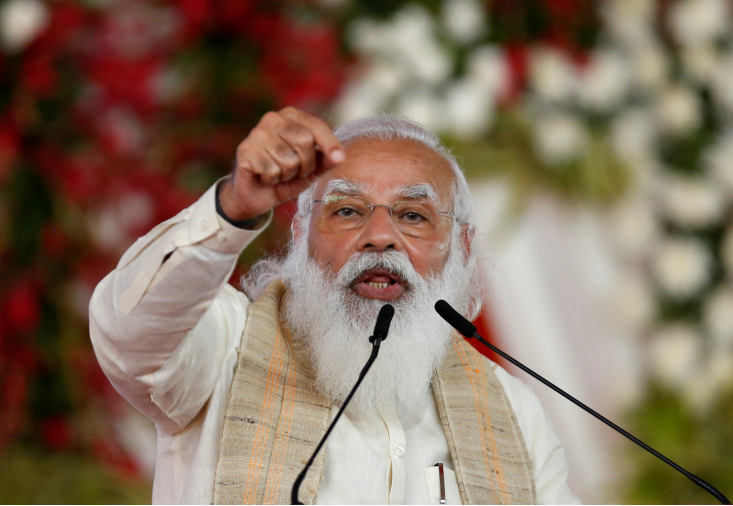 Hospitals and doctors have put out urgent notices saying they are unable to cope with the rush of patients.
Image: REUTERS/Amit Dave/File Photo

Prime Minister Narendra Modi urged all citizens to be vaccinated and exercise caution, saying the "storm" of infections had shaken India, as the country set a new global record of the most number of Covid-19 infections in a day.

The United States said it was deeply concerned by the massive surge in coronavirus cases in India and would rapidly send aid.

The number of cases surged by 349,691 in the past 24 hours, the fourth straight day of record peaks. Hospitals in Delhi and across the country are turning away patients after running out of medical oxygen and beds.

"We were confident, our spirits were up after successfully tackling the first wave, but this storm has shaken the nation," Modi said in a radio address.

His government has faced criticism that it let its guard down earlier this year, allowed big religious and political gatherings to take place when India's cases fell to below 10,000 a day and did not plan for boosted healthcare systems.

Hospitals and doctors have put out urgent notices saying they are unable to cope with the rush of patients.

Outside a Sikh temple in Ghaziabad city on the outskirts of Delhi, the street resembled an emergency ward of a hospital, but crammed with cars carrying Covid-19 patients gasping for breath as they were hooked up to hand held oxygen tanks.

Elsewhere, people were arranging stretchers and oxygen cylinders outside hospitals as they desperately pleaded for authorities to take patients in, Reuters photographers said.

"Every day, it the same situation, we are left with two hours of oxygen, we only get assurances from the authorities," one doctor said on television.

Delhi's Chief Minister Arvind Kejriwal extended a lockdown in the capital that had been due to end on Monday for a week. Covid-19 is killing one person every four minutes in the city.

Epidemiologists and virologists say more infectious variants of the virus, including an Indian one known as B.1.6.1.7, have fuelled the ferocious surge.

Doctors at New Delhi's All India Institute of Medical Sciences have found that one patient is now infecting up to nine in 10 contacts, compared with up to four last year.

In the last month alone, daily cases have gone up eight times and deaths by 10 times. Health experts say the death count is probably far higher.

"Our hearts go out to the Indian people in the midst of the horrific Covid-19 outbreak," US Secretary of State Anthony Blinken said on Twitter.

"We are working closely with our partners in the Indian government, and we will rapidly deploy additional support to the people of India and India's health care heroes."

The United States has faced criticism in India for its export controls on raw materials for vaccines put in place via the Defense Production Act and an associated export embargo in February.

The Serum Institute of India (SII), the world’s biggest vaccine maker, this month urged President Joe Biden to lift the block on exports of raw materials that is hurting its production of AstraZeneca shots.

Others such as US Congressman Raja Krishnamoorthi urged the Biden administration to release unused vaccines to India.

"When people in India and elsewhere desperately need help, we can't let vaccines sit in a warehouse, we need to get them where they'll save lives," he said.

German Chancellor Angela Merkel expressed her "sympathy on the terrible suffering" that the pandemic had brought to India, her chief spokesman Steffen Seibert said in a statement.

"Germany stands in solidarity with India and is urgently preparing a mission of support."

The surge in India is expected to peak in mid-May with the daily count of infections reaching half a million, the Indian Express said, citing an internal government assessment.

The newspaper said V.K. Paul, a Covid-19 task force leader, made the presentation during a meeting with Modi and state chief ministers and said the health infrastructure in heavily populated states is not adequate to cope.

Paul did not respond to a Reuters request for comment.

The US is deeply concerned by a massive surge in coronavirus cases in India and will race additional support to the Indian government and healthcare ...
News
1 year ago

Overwhelmed hospitals in India begged for oxygen supplies on Saturday as the country's coronavirus infections soared again overnight in a “tsunami” ...
News
1 year ago

People scrambled for life-saving oxygen supplies across India on Friday and patients lay dying outside hospitals as the capital recorded the ...
News
1 year ago