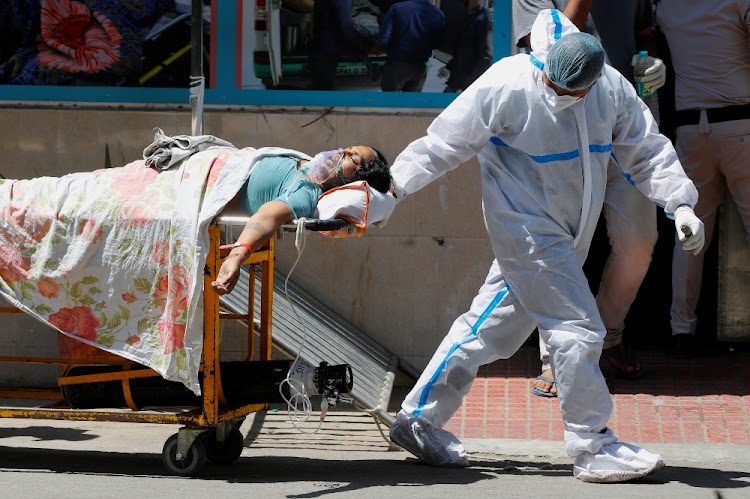 The World Health Organisation said it was working to deliver 4,000 oxygen concentrators to India, where a "perfect storm" of mass gatherings, more contagious variants and low vaccination rates have sparked the outbreak.
Image: REUTERS/Adnan Abidi

Vital medical supplies poured into India on Tuesday as hospitals starved of life-saving oxygen and beds turned away coronavirus patients, while a surge in infections pushed the death toll towards 200,000.

A shipment from Britain, including 100 ventilators and 95 oxygen concentrators, arrived in Delhi, said Reuters partner ANI, while France is sending oxygen generators able to provide 250 patients with a year's worth of the gas, its embassy said.

The first "Oxygen Express" train pulled into the capital, New Delhi, laden with about 70 tonnes of oxygen from an eastern state, but the crisis has not abated in the city of 20 million at the epicentre of the latest wave of infections.

"For seven days, most of us haven't slept," said Dr K. Preetham, an administrator at the Indian Spinal Injuries Centre, adding that the shortage of oxygen was a crucial worry.

"Because of the scarcity, we are forced to put two patients on one cylinder," he told Reuters.

The World Health Organisation said it was working to deliver 4,000 oxygen concentrators to India, where a "perfect storm" of mass gatherings, more contagious variants and low vaccination rates have sparked the outbreak.

"Many people rush to the hospital, even though home-based care monitoring...can be managed very safely," its spokesman, Tarik Jasarevic, told Reuters in an email.

Fewer infections were largely due to a drop in testing, health economist Rijo M John of the Indian Institute of Management in the southern state of Kerala said on Twitter.

"This should not be taken as an indication of falling cases, rather a matter of missing out on too many positive cases."

Delhi is in lockdown, as are the southern state of Karnataka and the worst-hit state of Maharashtra, although some states had been set to lift curbs this week.

The patchwork curbs, complicated by local elections and mass gatherings such as the months-long Kumbh Mela, or pitcher festival, could drive breakouts elsewhere.

About 20,000 devout Hindus gathered on the banks of the Ganges river in the northern city of Haridwar on the last auspicious day of the festival for a bath they believe will wash away their sins.

"We believe Mother Ganga will protect us," said a woman on the riverbank, where Reuters images showed people bathing with few signs of distancing measures, despite calls to be careful.

Tuesday's turnout was low, however, said Sanjay Gunjyal, a police official handling the arrangements, compared to the hundreds of thousands in previous weeks, as the crisis prompted many monk groups to limit participants to "symbolic" numbers.

India has turned to its armed forces for help as new cases have topped 300,000 since April 21.

Even China, locked in a year-long military standoff with India on their disputed Himalayan border, said it was trying to get medical supplies to its neighbour.

Prime Minister Narendra Modi has urged all citizens to get vaccinated amid the "storm" of infections.

In some of the worst-hit cities, bodies were being cremated in makeshift facilities in parks and parking lots, while television channels showed images of bodies crammed into an ambulance in the western city of Beed as transport ran short.

WORSE BEFORE IT GETS BETTER

India has converted hotels and railway coaches into critical care facilities to make up for the shortage of beds, but experts say the next crisis will be a lack of healthcare professionals.

"Unfortunately beds do not treat patients - doctors, nurses and paramedics do," said Devi Shetty, a cardiac surgeon and chairman of the Narayana Health chain of hospitals.

The Indian Medical Association said private hospitals in the western city of Surat would have to shut if they did not get oxygen soon, adding "We fear a law-and-order situation might ensue".

Companies ranging from conglomerates such as Tata Group and Reliance Industries Ltd to Jindal Steel and Power have stepped forward to help supply medical oxygen.

The U.S. Chamber of Commerce has warned that the Indian economy, the world's sixth largest, could falter as a result of the spike in cases, creating a drag for the global economy.

"We expect that this could get worse before it gets better," said its vice president, Myron Brilliant.

Australia halted direct passenger flights from India until May 15, joining a growing list of nations taking steps to keep out more virulent variants.

India, with a population of about 1.3 billion, has a tally of 17.64 million infections, but experts believe it runs much higher.

Vaccine demand has outstripped supply, partly because of a shortage of raw materials and a fire at a facility making the AstraZeneca shot.

Supply uncertainty could force western Maharashtra to postpone inoculations for people aged between 18 and 45, a government official said. India had planned to free up vaccination for all adults from May.

India is negotiating with the United States, which has said it will share 60 million doses of AstraZeneca's Covid-19 vaccine with other countries.

"Major lobbying is on ... to secure as much as possible," said a senior official participating in the talks, adding that Modi had been assured of priority for India.

Prime Minister Narendra Modi urged all citizens to be vaccinated and exercise caution, saying the "storm" of infections had shaken India, as the ...
News
1 year ago

The situation in India, where Covid-19 cases have surged, is "beyond heartbreaking", and the World Health Organisation is sending extra staff and ...
News
1 year ago