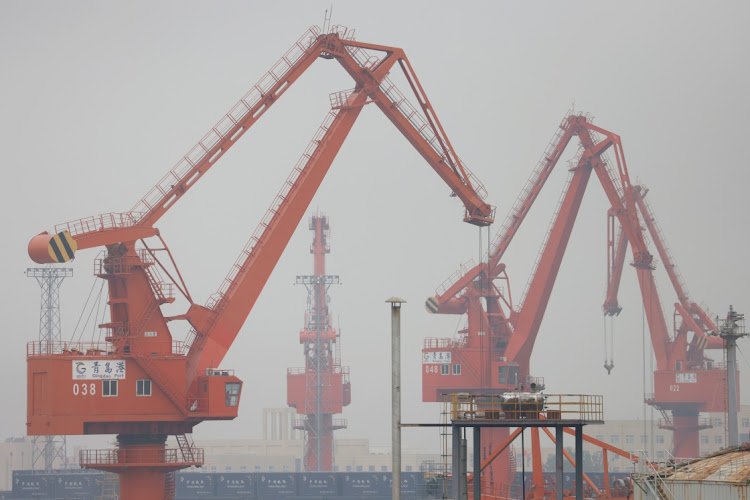 Cranes are seen in the fog at the port of Qingdao in Shandong province, China, on April 28 2021 following an oil spill in the Yellow Sea caused by a collision between tanker A Symphony and bulk vessel Sea Justice off the port.
Image: REUTERS/Carlos Garcia Rawlins

Cleanup crews worked on Wednesday to contain an oil spill in the Yellow Sea near the Chinese port city of Qingdao, a day after a collision between a tanker carrying around a million barrels of bitumen mix and a bulk vessel in thick fog.

The size of the spill has yet to be determined.

“There are oil spill experts on the scene that have started cleanup operations,” said a spokesperson for Goodwood Ship Management, manager of the Liberia-flagged tanker, A Symphony, which was at anchor when involved in the collision with shipping vessel Sea Justice. The impact caused a breach in its cargo tanks and ballast tanks.

The Shandong Maritime Safety Administration said on its Weibo account on Wednesday morning that the collision caused a “minor” spill.

The two ships were in stable condition, there were no casualties and a probe into the cause of the accident was under way, it added. On Tuesday it told ships to stay at least 10 nautical miles from the A Symphony, but didn't provide details on how much oil has leaked.

An official from the ministry of ecology and environment told Reuters on Wednesday that they had sent experts to Qingdao to check the spill but did not give further details.

Hong Kong-based fuel trading company Run Cheng International Resource (HK) Co has said it was the owner of the 150,000-tonne cargo of bitumen blend on board the A Symphony.

Bitumen mix, a blend of heavy crude oil and residue, is used by China's independent refiners as an alternative refining feedstock as it often incurs a lower import tax than crude oil. It is also used for road surfacing and roofing.

Oil tanker safety has improved in recent decades — partly due to the introduction of double-hulled ships — and major spills are rare, though there are still risks with the transport of oil by sea, which has the potential to cause major environmental damage.

The 272 metre-long and 46 metre-wide oil tanker was sold in May 2019 to its new owners Symphony Shipholding SA and NGM Energy, Equasis data showed.

The head of the Suez Canal Authority (SCA) said on Monday he hoped talks would soon yield an agreement with the owner and insurer of a giant ...
News
5 months ago

Sri Lanka will take legal action against the owner of the oil supertanker that caught fire on Thursday as there is a large leakage of bunker oil from ...
News
1 year ago