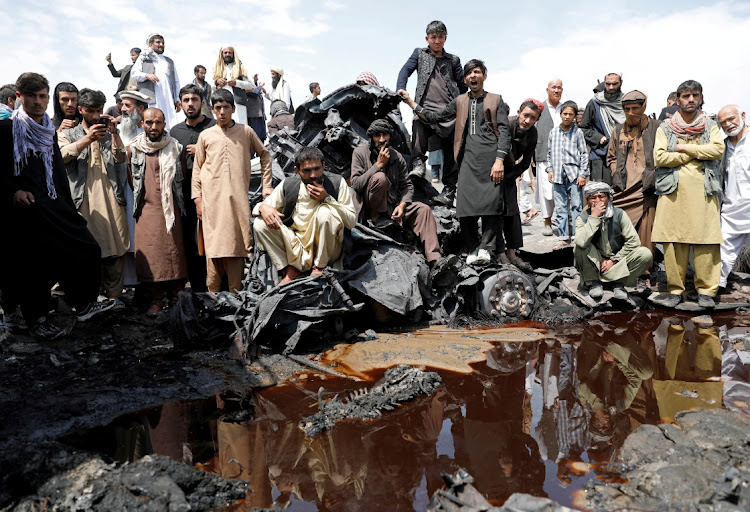 Men look at human remains following an overnight fire on the outskirts of Kabul, Afghanistan, on May 2 2021.
Image: REUTERS/Mohammad Ismail

Gasoline tanker trucks burst into flames in Kabul overnight, killing at least seven people and starting large fires that caused power cuts to some parts of the Afghan capital, officials said on Sunday.

The tankers were parked in northern Kabul and burst into flames late on Saturday, according to the ministry of interior. Fourteen people were injured.

Tariq Arian, the ministry of interior spokesperson, said authorities were still investigating how the fire started and did not yet know the cause, but he ruled out a “terrorist incident”.

Two security sources had earlier told Reuters they believed it was caused by a Taliban rocket fired in the area. But Taliban spokesperson Zabihullah Mujahid has said they were not involved.

The city remains on high alert, with officials bracing for attacks from the insurgent Taliban over the continued presence of foreign troops in the country.

Afghanistan's Chamber of Commerce spokesperson Jan Aqa Naweed said that hundreds of containers that held both fuel and foodstuffs worth millions of dollars had been damaged.

At least 18 people, including two healthcare workers were killed in a fire at a Covid-19 hospital in the western Indian state of Gujarat late on ...
News
2 weeks ago

Eight people died in a fire in an illegal hostel in the centre of the Latvian capital Riga early on Wednesday, officials said.
News
2 weeks ago
Next Article