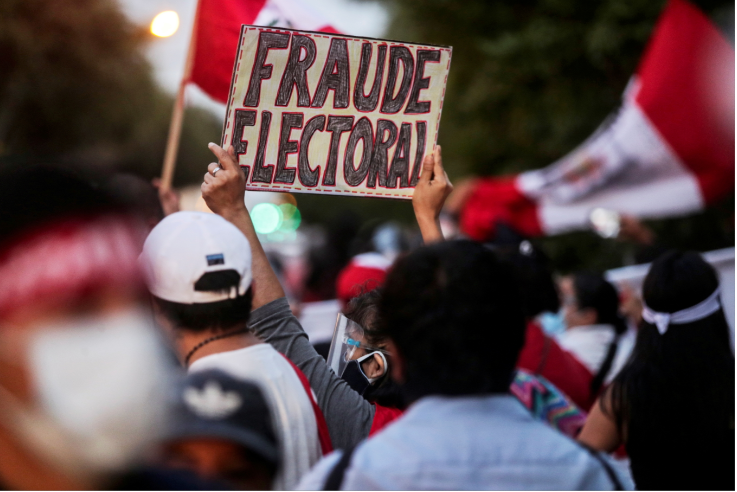 FILE PHOTO: A person holds up a sign amid people protesting against Peru's presidential candidates Pedro Castillo and Keiko Fujimori, who will face each other in the second round of the presidential election, in Lima, Peru on April 17 2021. The sign reads: "Electoral Fraud".
Image: REUTERS/Sebastian Castaneda/File Photo

Peru's presidential election race is tightening a month ahead of a run-off vote in June, with socialist Pedro Castillo still ahead, while pollsters say the key battles are in poor, rural regions and in convincing a large group of undecided voters.

Frontrunner Castillo, a schoolteacher largely unknown to most Peruvians prior to the April first-round vote, garnered 43% of voting intentions in the poll, while Keiko Fujimori took 34%, according to pollster Ipsos Peru.

Fujimori, in her third candidacy for president of Peru, has closed the gap by two percentage points versus a similar poll by Ipsos two weeks prior. Another recent poll by Datum International also showed a tightening race.

Socialist Castillo's support is strongest in the poorest regions of Peru, and ranges between 46% and 60%, the poll showed, while Fujimori polls strongest in the richest, but less populous, areas of the country.

"The great battle will be there, in the poorest socio-economic sectors," Alfredo Torres, chief executive of Ipsos Peru, said in a television interview.

The Ipsos poll of 1,204 people conducted on April 30 with a margin of error of 2.8%, indicated that the share of undecided voters had fallen to 23%, from 27% two weeks prior. That margin still left plenty of room for surprises on June 6, the pollster said.

The coronavirus pandemic has ravaged the economy of the world's No. 2 copper producer, pushing up poverty and unemployment, and a slow, corruption-plagued vaccination program has left many Peruvians frustrated and angry.

Castillo, who normally sports a wide-brimmed hat and has struck a chord with Peru's less affluent voters, wants to rewrite the country's Constitution to weaken the business elite and give the state a more dominant role in the economy.

Fujimori, a free-market proponent and daughter of ex-President Alberto Fujimori who is in jail for human rights abuses, also has pledged to distribute the country's mineral wealth more evenly to the Peruvian people and to provide vaccines.

Peruvian interim president Manuel Merino came under growing pressure on Sunday to resign after half his new cabinet stepped down following the deaths ...
News
6 months ago
Next Article