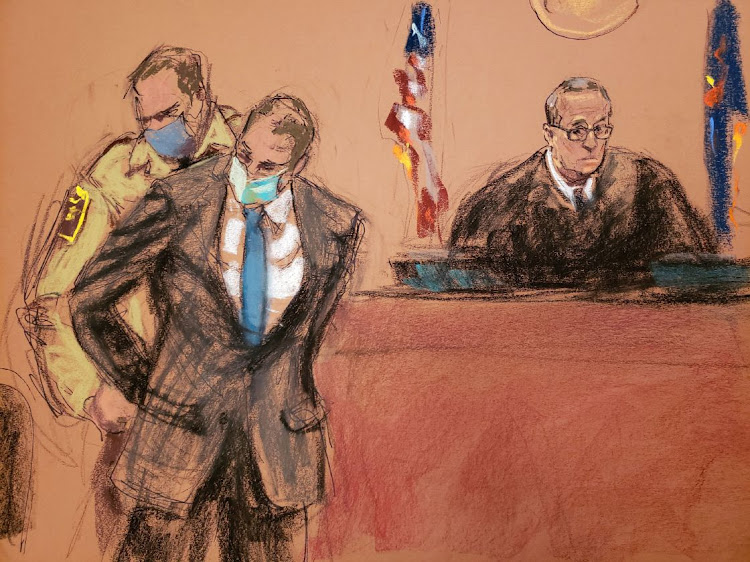 CONVICTED In a confrontation captured on video, Chauvin, a white veteran of the police force, pushed his knee into the neck of Floyd, a 46-year-old Black man in handcuffs, for more than 9 minutes on May 25, 2020.
Image: REUTERS/Jane Rosenberg

Former Minneapolis police officer Derek Chauvin asked a judge on Tuesday for a new trial, court records showed, two weeks after he was found guilty of murder and manslaughter in the killing of George Floyd.

In a series of motions filed to District Court Judge Peter Cahill, attorney Eric Nelson said his client was deprived of a fair trial, adding there was prosecutorial and jury misconduct, errors of law at trial and that the verdict was contrary to the law. Prosecutors did not immediately file a response to the motions for a new trial.

On April 20, a 12-member jury found Chauvin, 45, guilty on all three counts he faced after considering three weeks of testimony from 45 witnesses, including bystanders, police officials and medical experts. The charges were second-degree unintentional murder, third-degree murder and second-degree manslaughter.

The rare verdict against a police officer is considered a milestone in the fraught racial history of the United States and a rebuke of law enforcement’s treatment of Black Americans.

In a confrontation captured on video, Chauvin, a white veteran of the police force, pushed his knee into the neck of Floyd, a 46-year-old Black man in handcuffs, for more than 9 minutes on May 25, 2020. Chauvin and three fellow officers were attempting to arrest Floyd, accused of using a fake $20 bill to buy cigarettes at a grocery store.

Floyd's death led to protests in the United States and abroad about excessive use of force by police against people of color.

The day before the jury reached its verdict, Cahill harshly criticised US Representative Maxine Waters' remarks on the case, saying she might have given the defense grounds for appeal in the event of a conviction.

After the jury got the case and was sequestered, President Joe Biden also commented on the trial, saying that he hoped "the verdict is the right verdict."

Nelson also accused the Minnesota state prosecutors of misconduct when they disparaged the defense and said the court failed his client when it did not force Morries Hall, who was in the car with Floyd when police arrived, to testify.

A photo circulated by several news organisations has also raised questions about the impartiality of one juror, Brandon Mitchell, the Washington Post reported.

The photo shows Mitchell wearing a T-shirt with the words "get your knee off our necks" around a picture of Martin Luther King Jr. Mitchell was also wearing a Black Lives Matter baseball cap.

On Monday, Mitchell defended the photo, telling the Minneapolis Star Tribune that the photo was taken in DC in August during the commemoration of Martin Luther King Jr.’s “I Have a Dream” speech from 1963.

Nelson did not mention Mitchell directly in the court filing on Tuesday, but requested the court to hold a hearing to impeach the verdict based on the grounds that the "jury committed misconduct."

US to probe Louisville, Kentucky, police after Breonna Taylor death

The US Justice Department on Monday launched a civil probe of the Louisville, Kentucky, police department whose officers last year fatally shot ...
News
1 year ago

Mmusi Maimane and Thuli Madonsela weigh in on the triumph of justice in the George Floyd killing while mourning the killing of Lindani Myeni by ...
Politics
1 year ago

The judge in the trial of Derek Chauvin, the former Minneapolis policeman charged with George Floyd's deadly arrest last May, denied a defense ...
News
1 year ago