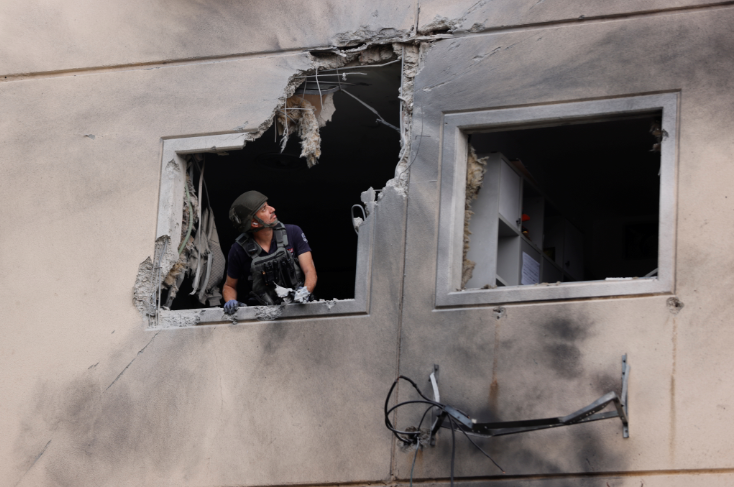 An Israeli police bomb disposal expert looks out from the window of a residential building that was damaged after it was hit by a rocket launched from the Gaza Strip, in Ashkelon, southern Israel on May 11 2021.
Image: REUTERS/Amir Cohen

Palestinians fired uninterrupted barrages of rockets into Israel, as its military pounded Gaza with air strikes through the early hours of Tuesday, in a dramatic escalation of clashes in Jerusalem.

Six Israelis were wounded by a rocket, medics said.

Nine children were among the 20 dead in Gaza on Monday and scores of rockets were launched into Israel, many that were intercepted by missile defences.

The events were unleashed by Gaza militants firing on the Jerusalem area for the first time since a 2014 war, crossing what Israeli Prime Minister Benjamin Netanyahu called a "red line".

The upsurge in violence came as Israel celebrated "Jerusalem Day", marking its capture of East Jerusalem in the 1967 Arab-Israeli war.

The escalation began with confrontations at Al-Aqsa Mosque in the heart of the walled Old City on the compound known to Jews as Temple Mount and to Muslims as the Noble Sanctuary - the most sensitive site in the Israel-Palestinian conflict.

The Palestine Red Crescent Society said more than 300 Palestinians were injured in clashes with Israeli police, who fired rubber bullets, stun grenades and tear gas in the compound. Police said 21 officers were hurt in the skirmishes.

Although the trouble died down after a few hours, there were other focal points of tension, such as the Sheikh Jarrah neighbourhood of East Jerusalem just north of the Old City, where several Palestinian families face eviction from homes claimed by Jewish settlers in a long-running legal case.

Hamas, the Islamist militant group that controls Gaza, set an evening deadline for Israel to remove its police from Al-Aqsa and Sheikh Jarrah. When it expired, sirens wailed in Jerusalem and rockets pounded the city's outskirts.

Israel views all of Jerusalem as its capital, including the eastern part annexed after the 1967 war in a move that has not secured international recognition.

Palestinians want East Jerusalem for the capital of a state they seek in Gaza and the Israeli-occupied West Bank.

Hamas and the smaller Islamic Jihad militant group claimed responsibility for the rocket fire on Jerusalem.

The Israeli military said it struck targets that included militant operatives, attack tunnels and the home of a Hamas battalion commander.

Of the 20 Palestinians killed on Monday, seven, including three children, were family members who died in an explosion in the town of Beit Hanoun, though it was unclear if it had been cause by an Israeli strike or a Palestinian rocket that had fallen short.

An Israeli military spokesman said about a third of the Palestinian rockets fired had fallen short and caused damage and casualties inside Gaza.

International efforts to stem the violence appeared to have already. A Palestinian official told Reuters that Egypt, Qatar and the United Nations, which have mediated truces between Israel and Hamas in the past, were in contact with the group's leader Ismail Haniyeh.

Tension had been building for weeks during the Muslim holy month of Ramadan, amid clashes between Israeli security forces and Palestinian protesters prompting international concern that events could spiral out of control.

Israel's attorney-general secured a deferment on Sunday of a court hearing on planned evictions of Palestinians in Jerusalem, a session that had ...
News
4 months ago

Saudi Arabia and the United Arab Emirates on Saturday condemned Israel's plans to evict Palestinians from homes on land claimed by Jewish settlers, ...
News
4 months ago