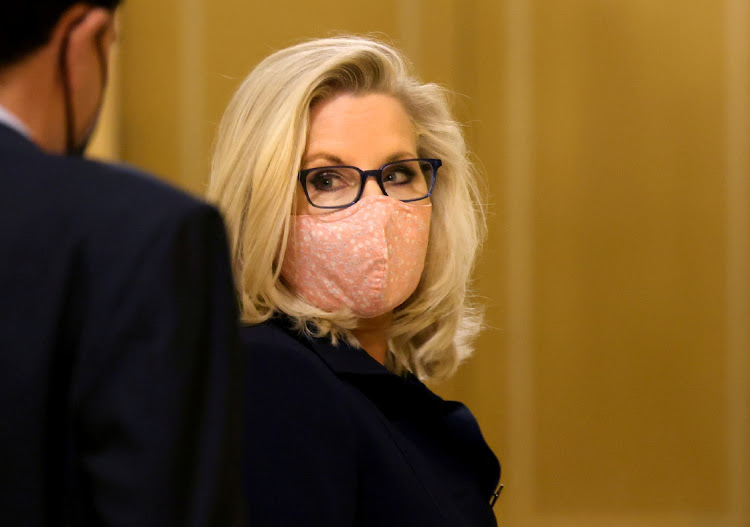 US Representative Liz Cheney, who is facing expected removal as chair of the House Republican Conference, leaves after a House vote at the US Capitol in Washington, US, on May 11 2021.
Image: REUTERS/Evelyn Hockstein

When lifelong Wyoming Republican Tage Benson and Democrat Chamois Andersen met for the first time at the Owl in the Attic antiques store in Laramie this past weekend, they quickly put their political differences aside.

Their home state's embattled Republican congresswoman, Liz Cheney, needed to be supported, they agreed, for standing up to former president Donald Trump and contesting his false stolen-election claims.

“This is where Democrats and Republicans can come together,” said Anderson, 51, a wildlife advocate who often disagrees with Cheney on policy.

“She is a hero,” said Benson, 67, who was working the store's register. He told Andersen his Democratic friends were talking about registering as Republicans to vote for Cheney in the party's primary election next year. “I'm going to talk everyone into that,” he said.

Such a rare bipartisan show of support constitutes a potential lifeline as the third-term congresswoman and daughter of former vice-president Dick Cheney fights for political survival.

Her fellow Republicans in Washington are scheduled to hold a vote on Wednesday on removing Cheney as the third-ranking Republican in the House of Representatives, where the party is the minority. Kevin McCarthy, the chamber's top Republican who has sought to placate Trump, has cast her ouster from the party leadership as necessary to unify Republicans and reclaim control of the House in 2022.

Cheney is also in trouble in her home state of Wyoming, where Trump and Cheney both won with 70% of the vote in November.

Former US President Donald Trump on Tuesday launched a space on his website where he can post messages that can be shared by others to Twitter and ...
News
1 year ago

The majority is furious with her vote to impeach Trump for allegedly inciting the deadly January 6 riot at the US Capitol and her repeated criticism of his claims the election was rigged, according to three dozen voters Reuters interviewed in conservative towns of Gillette and Douglas, more moderate Laramie and the state capitol of Cheyenne over five days this month.

Mike Gapter, owner of a bedding and hot tub store in Laramie, said the 2020 ballot was his final vote for Cheney. “She's proved herself unworthy,” he said.

But an unlikely coalition of traditional Republicans, independents and Democrats — about one third of the voters interviewed — said they would likely vote for her, a floor of support that could keep her hopes alive for re-election.

It is too early for opinion polls about the primary. Wyoming law allows residents of any affiliation to vote in the Republican primary if they switch their registration on election day, potentially helping Cheney.

Cheney, 54, who has not said whether she will run for a fourth term, also could prove to be a formidable target. She raised $1.54m (R21.5m) in the first quarter, her best fundraising quarter since she was elected in 2016.

In pushing to oust her, House Republicans made clear they see their fortunes tied to Trump and his fervent supporters. But his influence could alienate the independent, suburban and women voters need to take back control of the House, said Alex Conant, a former campaign aide to Republican senator Marco Rubio of Florida.

“House Republicans want to be associated with Trump, and they're taking a risk that it might turn off some independent voters,” Conant said.

Trump remains by far the most popular figure in the Republican Party; but polls show voters are split over what to do with critics like Cheney, while a sizeable minority of Republicans appear ready to move on from him.

In a May 7-10 Reuters/Ipsos opinion poll, six out of 10 Republicans said their party would be stronger “when it embraces supporters and critics of Donald Trump,” while four in 10 think it better that the party “purges leaders who are critical” of him.

The poll also found that three in 10 Republicans are interested in “joining a conservative political party that is run by former Republican leaders who have been critical of Donald Trump”.

We didn't elect her to vote her conscience

Barbara Comstock, a former Republican congresswoman who lost her suburban Virginia seat in 2018 amid a surge of anti-Trump sentiment, said that ousting Cheney could prove dangerous for Republican incumbents from deeply conservative districts too, who could see their fealty to Trump challenged by an energised crop of Trump-inspired primary candidates.

“What they’re going to open the door to is a situation where nobody’s Trumpy enough,” she said. “It’s a problem for everybody.”

Asked about the intraparty fight over Cheney and its impact on House races, Tom Emmer, chairman of the National Republican Congressional Committee, said he is “solely focused on retaking the majority”.

“House Republicans are united in that effort,” he said.

Sparsely populated Wyoming is one of the most conservative states in the country, where Republicans outnumber Democrats by more than 3 to 1.

In her first run for Congress in 2016, Cheney beat a crowded Republican primary field with about 40% of the vote — although fewer than 90,000 people voted in total. She received more than 70% of the vote in successive primaries and has won general elections just as easily.

Cheney declined an interview request. While she has yet to announce her plans, six Republicans have already announced they will run against her.

Anger towards Cheney was evident at a coffee shop called The Local, in Gillette, a town of 32,000 people and at the centre of the Powder River Basin, whose mines produce about 40% of the coal output in the US.

Donald Trump's former personal lawyer Rudy Giuliani denied on Thursday he had ever represented a Ukrainian national, a day after federal agents ...
News
1 year ago

All five men at a table in the back of The Local said they could not support Cheney after she went against Trump.

“We are very loyal people here,” said Paul Roberts, 47. “We didn't elect her to vote her conscience.”

If she decides to run, Cheney could potentially outperform a fragmented field of challengers — although Trump had recently said he would endorse a candidate soon. There is also a history of Democrats in the state of switching sides in primaries to help defeat more conservative candidates, political observers say, including in 2018 to bolster Republican governor Mark Gordon.

Jenasie Kendall, a 23-year-old independent who works at a wine shop in Cheyenne, said she would consider registering as a Republican to help Cheney win.

“I respect what she is trying to do, 100 percent,” said Kendall.

Brendan Buck, once a top aide to former House speaker Paul Ryan, was less sanguine about her future.

“This is a Republican Party that reflects the base, and it’s a base that wants what Donald Trump is selling.”

At noon on Wednesday the world will heave a sigh of relief when Donald Trump packs his bags and vacates the White House. Having long abandoned all ...
News
1 year ago