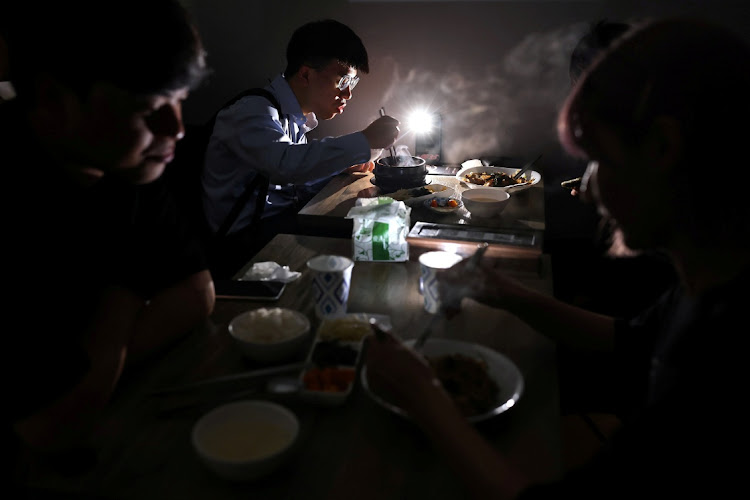 People eat using the light from their phone while experiencing a blackout due to an outage at a power plant, in Taipei, Taiwan, May 13, 2021.
Image: REUTER/Ann Wang

Taiwan imposed power cuts on Monday evening following a spike in demand amid a heatwave and drought and failure at a power plant, in the second such outage in a week, though far fewer homes were affected.

Taiwan, which major chip makers such as Taiwan Semiconductor Manufacturing Co Ltd (TSMC) call home, already imposed phased blackouts on Thursday following an outage at a plant in the southern city of Kaohsiung.

TSMC, which has factories across the island, said it had seen “no affect so far” from Monday's power cuts.

Taipower blamed a rise in demand coincided with the suspension of some generators due to a technical failure at the southern Hsinta Power Plant, the same facility that caused the problem last week.

The state-own company said that the worst drought to hit the island in more than half a century meant electricity generated by hydropower plants was insufficient to meet the unexpected demand on Monday evening, a record high for May.

By 8:40pm, only 40% of the supply had been restored in the coal- and gas-fired power plant, Taipower said.

Taiwan's main opposition party, the Kuomintang, said the outages showed the government's power policy was inadequate and called for Economy Minister Wang Mei-hua to step down.

Taiwan is now experiencing an unusually hot May with temperatures in parts of the island peaking at around 40 °C (104 Fahrenheit).