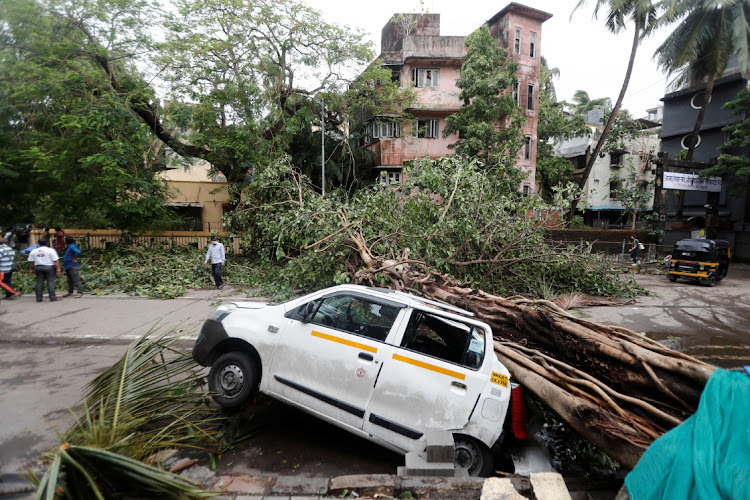 An uprooted tree is seen on a car after strong winds caused by Cyclone Tauktae, in Mumbai, India, on May 18 2021.
Image: REUTERS/Francis Mascarenhas

The Indian Navy mounted a massive air and sea rescue mission on Tuesday for 81 missing oil workers and crew whose barge sank in heavy seas following a powerful cyclone that tore up the west coast of the country.

About 180 of those on board the barge were rescued from the water as it sank off Mumbai. Efforts had started to move crew stuck on a second barge that was driven aground by the storm, the navy said.

“There are waves of 20 to 25 feet, the winds are high and the visibility is low,” said navy spokesperson Vivek Madhwal. “Ships and aircraft have been deployed for the search and rescue mission.”

Cyclone Tauktae, the most powerful storm to batter the west coast in two decades, ripped out power pylons, trees and caused houses to collapse, killing at least 19 people, authorities said.

The storm made landfall in Gujarat state on Monday, piling pressure on the authorities at a time when India is grappling with a staggering spike in coronavirus cases and deaths as well as a shortage of beds and oxygen in hospitals.

India's total coronavirus cases surged past the 25 million mark on Tuesday, boosted by 263,533 new infections over the last 24 hours, while deaths ...
News
1 year ago

Heavy rain and high winds continued to lash the state but authorities said they were making sure that medical supplies such as life-saving oxygen were being delivered to hospitals.

“Our priority is to clear the roads, so there is no impact on oxygen movement,” said Gaurang Makwana, the top official of Bhavnagar district in Gujarat.

On Monday, the crew sent an SOS that the ship had lost control as the cyclone roared past the Mumbai coastline. Naval ships were deployed to the area and on Tuesday, as it started sinking, many of the crew were rescued from the sea.

The oilfields are about 70km southwest of Mumbai and the barges are deployed by Afcons Infrastructure Limited, a construction and engineering company based in Mumbai and were engaged in contract work awarded by Oil and Natural Gas Corp, country's top exploration company.

Afcons did not immediately respond to an e-mail seeking comment, while ONGC said in a statement it was extending help to the navy and coastguard in the rescue effort.

Rescue operations for another vessel, Gal Constructor, which had gone adrift with 137 people on-board were completed on Tuesday with everyone being rescued, the navy said.

More than 200,000 people had been evacuated from their homes in Gujarat before Tauktae, packing gusts of up to 210kph, made landfall.

No damage has been reported at refineries located in Gujarat and sea ports that were expected to be in the storm's path.

At the Jamnagar refinery, the world's biggest oil refinery complex that is owned by Reliance Industries, no damage was reported, a company spokesperson told Reuters.

A tropical cyclone on Australia's west coast destroyed several homes and cut electricity to tens of thousands of people overnight before weakening on ...
News
1 year ago

Gregorius Hide, a 70-year-old farmer in the eastern Indonesian province of East Nusa Tenggara, said the only warning he had of an approaching swirl ...
News
1 year ago