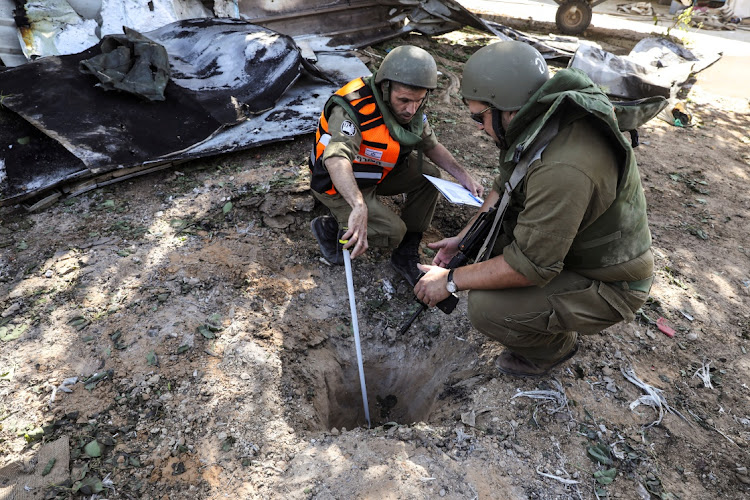 Israeli security forces examine the site where a rocket launched from the Gaza Strip landed, causing fatalities, on a farm just over the Gaza border, in Moshav Ohad, southern Israel May 18, 2021.
Image: REUTERS/Baz Ratner

Israel bombarded Gaza with air strikes and Palestinian militants resumed cross-border rocket fire on Tuesday after a brief overnight lull during which the UN sent a small fuel convoy into the enclave, where it says 52,000 people are now displaced.

Israeli leaders said they would press on, for now, with an offensive to destroy the capabilities of the armed factions Hamas and Islamic Jihad, amid calls by the US and other world powers for an end to the conflict.

“The fighting will not cease until we bring total and long-term quiet,” Israeli Defence Minister Benny Gantz said in a video statement, blaming Hamas for the worst escalation in Israeli-Palestinian fighting in years.

Hamas began firing rockets eight days ago in retaliation for what it said were Israeli rights abuses against Palestinians in Jerusalem. Palestinians in the Israeli-occupied West Bank and Israel's 21% Arab minority staged a general strike on Tuesday in solidarity.

“It allows the other side, the Jews, to realise the big impact of the Arabs,” Diaa Rabaya’a, 23, said at Damascus Gate between East Jerusalem and the Old city. “Any day they choose not to work, it almost disables the country.”

Nearly 450 buildings in the Gaza strip have been destroyed or badly damaged, including six hospitals and nine primary care health centres, the United Nations humanitarian agency said. Some 47,000 of the 52,000 displaced had fled to UN schools.

Israel said more than 3,450 rockets have been launched at it from Gaza, some falling short and others shot down by its Iron Dome air defences. It says its forces have killed about 130 Hamas fighters and another 30 from Islamic Jihad.

The Israeli bombardment of Gaza, Ramadan clashes between police and worshippers at Al-Aqsa Mosque in Jerusalem and a court case by Israeli settlers to evict Palestinians from Sheikh Jarrah in East Jerusalem have caused anger among Palestinians.

France's president said on Monday he would work with Egypt's president and Jordan's king on a concrete proposal for a ceasefire and a possible path ...
News
8 months ago

General strikes were held Tuesday in East Jerusalem, Arab towns within Israel and in the West Bank cities with posts on social media bearing a Palestinian flag and urging solidarity “from the sea to the river”.

Palestinian businesses across East Jerusalem were shuttered, including in the walled Old City, and in the mixed Jewish-Arab port city of Haifa in northern Israel, protest organiser Raja Zaatar told Reuters the strike had closed 90% of businesses in Arab neighbourhoods.

Ra’afat al-Saman, a business owner in East Jerusalem's Salahaddin street, named after the Muslim conqueror who seized Jerusalem from the Crusaders in 1187, said he supported the strike.

The road is just a few minutes walk from Al-Aqsa mosque, the third holiest site in Islam, which lies in the heart of the walled Old City on the historic compound known to Jews as Temple Mount and to Muslims as the Noble Sanctuary.

“This is the least we could do for our own people. We stand in solidarity with Gaza, Sheikh Jarrah, al-Aqsa and against the violations,” he said.

Yuval Steinitz, an Israeli cabinet minister from Prime Minister Benjamin Netanyahu's right-wing Likud party, deplored the strike as “another blow to the delicate fabric of relations and co-operation between Jews and Arabs”.

The Israeli military's chief spokesperson, Brigadier-General Hidai Zilberman, said it was continuing to operate in Gaza in accordance with a target list for the coming 24 hours.

“The IDF (Israel Defence Forces) is not talking about a ceasefire. We're focused on the firing,” he told Army Radio.

Gaza residents said Israel was keeping up intense air strikes. In Israel, sirens indicated rocket salvoes were focused on border communities — despite a threat by Hamas on Monday to renew longer-range attacks on Tel Aviv.

Demonstrations over the Gaza crisis and recent Jerusalem tensions were also planned for Ramallah, Hebron and other Palestinian cities across the West Bank.

Strike participation in Ramallah seemed to be high, with the main highway from the city centre to the Qalandia checkpoint giving access to Jerusalem almost completely deserted, a Reuters witness said.

“We closed our shop like everyone else in solidarity with all Palestinians against the acts that are carried out against all of us,” said Mahmoud Jabr, 50, a grocery store owner outside his shuttered shop in Ramallah.

In signs of a possible spread of the violence, the Israeli military said its troops shot dead a Palestinian who tried to attack them with a gun and improvised explosives in the occupied West Bank and that it downed an unmanned aerial vehicle (UAV) near the border with Jordan on Tuesday.

Calling Netanyahu on Monday night, US President Joe Biden said Israel had the right to defend itself against indiscriminate rocket attacks but encouraged it to make every effort to protect civilians, the White House said. Egypt and UN mediators also stepped up diplomatic efforts, while the UN General Assembly will meet to discuss the violence on Thursday.

The top US military officer, Army General Mark Milley, warned on Monday that the violence could spread.

“My assessment is that you risk broader destabilisation and you risk a whole series of negative consequences if the fighting continues,” Milley, chairman of the Joint Chiefs of Staff, told reporters before landing in Brussels on Monday for talks with NATO allies. “It's in no-one's interest to continue fighting.”