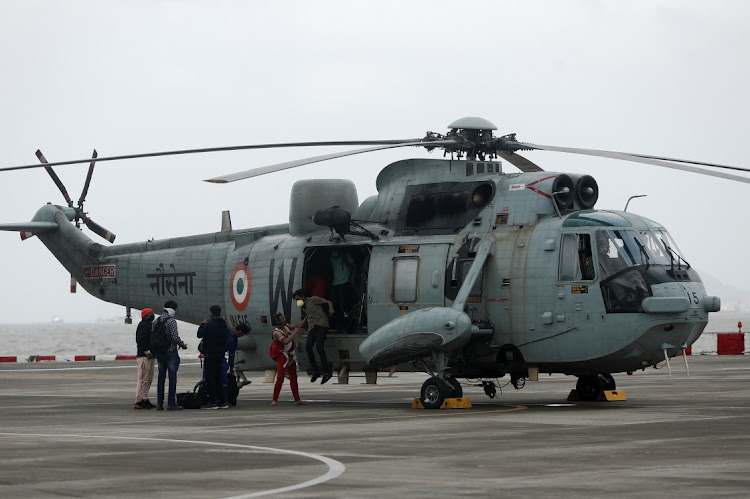 People who were stranded at sea due to Cyclone Tauktae exit an Indian Navy Sea King Mk.42C helicopter, after they were rescued by the Indian Navy, at INS Shikra, Colaba, Mumbai, India, May 18, 2021.
Image: REUTERS/Francis Mascarenhas

The Indian Navy mounted a massive air and sea rescue mission on Tuesday for 79 oil workers and crew whose barge sank in heavy seas after a powerful cyclone that tore up the west coast killing at least 29 people.

About 182 of those on board the barge, which sank off the coast of Mumbai, were rescued from the huge waves, the navy said.

It has piled pressure on Indian authorities as they grapple with a massive rise in coronavirus infections and deaths as well as a shortage of beds and oxygen in hospitals.

“This is one of the most challenging search and rescue operations I have seen in the last four decades,” Murlidhar Sadashiv Pawar, Deputy Chief of Naval Staff, told Reuters partner ANI on Tuesday.

The storm made landfall in Gujarat state late on Monday and was expected to weaken overnight into Wednesday, the Indian Meteorological Department said.

He said 160 state roads had been destroyed, 40,000 trees uprooted and several houses damaged by the cyclone.

On Monday, the crew sent an SOS that the ship had lost control as the cyclone roared past Mumbai. Naval ships were sent to the area and on Tuesday, as the barge started sinking, many of the crew were rescued from the sea.

The oilfields are about 70km (45 miles) southwest of Mumbai. The barges are deployed by Afcons Infrastructure Ltd, a construction and engineering company based in Mumbai, and were engaged in contract work awarded by Oil and Natural Gas Corp (ONGC), India's top exploration company.

“P305 had a full complement of safety equipment including life jackets and life rafts for all people on board. We believe all personnel safely evacuated before the vessel sank,” Afcons said in a statement late on Tuesday.

The storm caused damage to several of the vessels deployed, the company said, adding that every effort was being made to rescue the missing personnel.

ONGC said in a statement it was extending help to the navy and coastguard in the rescue effort.

More than 200,000 people were evacuated from their homes in Gujarat before the arrival of Tauktae, which packed gusts of up to 210kph (130mph).

No damage was reported at refineries in Gujarat or at seaports located in the storm's path. Operations at India's largest private port, Mundra, have resumed, a port official said.

The Indian Navy mounted a massive air and sea rescue mission on Tuesday for 81 missing oil workers and crew whose barge sank in heavy seas following ...
News
1 year ago