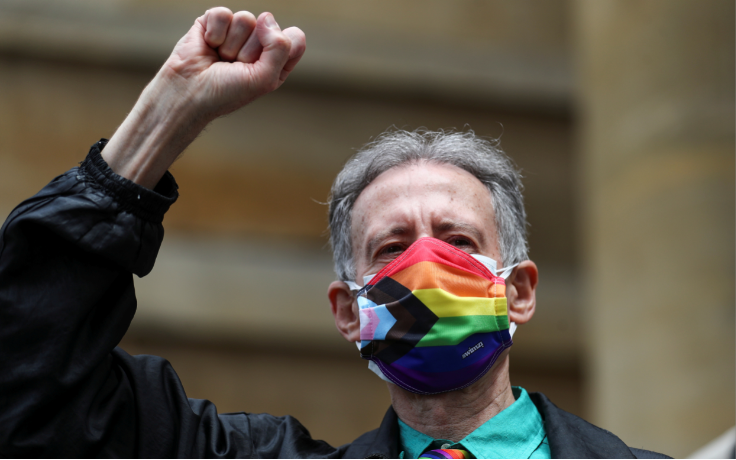 Driven by passion and motivated by justice, veteran activist Peter Tatchell says LGBT+ equality remains elusive despite his 50-year campaign for gay rights in Britain and beyond.

In a Netflix documentary that premiered on Thursday, the maverick campaigner said fairness for LGBT+ people from Iran to Zimbabwe was a distant dream and the West had to change, too.

"The battle for queer freedom will never end until every LGBT+ person on this planet has respect, dignity and human rights," he told the Thomson Reuters Foundation.

Tatchell said the fight for rights had stalled in Britain, where the government this month announced a consultation before moving to outlaw practices that aim to change a person's sexual orientation or gender identity.

"(Britain) is blocking a ban on LGBT+ conversion therapy … and still detains and deports LGBT+ asylum seekers," he said.

The film is awash with celebrity stardust - it was produced by singer Elton John and his husband David Furnish, with "Lord of the Rings" star Ian McKellen as lead interviewer.

The 69-year-old estimates he has taken part in more than 3,000 protests, resulting in 100 arrests, 300 violent assaults, 50 attacks on his flat and half a dozen plots to kill him.

"And thousands of death threats," he said in a phone interview.

Critics say that Tatchell's form of direct action, inspired by the suffragettes and the U.S. civil rights movement, have at times set back LGBT+ rights, with Tatchell dominating the story.

"Occasionally I may have thought he was on a bit of an ego trip," fellow activist Angela Mason told the Netflix film as she recalled sparring over tactics with Tatchell in the 1990s.

At the time, Mason led Stonewall, Britain's leading LGBT+ rights organisation, which opted for a parliamentary lobbying approach over the more combative route adopted by Tatchell.

But Mason said he was ever true to himself - and his cause.

"His beliefs and his personality are so deeply entwined that he's just always felt this great urge to campaign for justice. So who can quarrel with that really?" Mason told the Thomson Reuters Foundation.

Europe's LGBT+ Prides swap parties for politics due to Covid-19

Pride marches around Europe are swapping mass parties for much smaller gatherings focused on fighting LGBT+ inequality, with one of the world's ...
News
5 months ago

STANDING UP TO BULLIES

Born in Australia, Tatchell said growing up with an abusive stepfather had inspired him to "stand up to bullies and take on tyrants".

So in 2001, he captured global headlines after trying to perform a citizen's arrest of Zimbabwean President Robert Mugabe.

Tatchell said his stunt earned him a beating from Mugabe's bodyguards - and changed his popular profile, too.

But the years of activism have come at a price.

"Campaigning and violent assaults have taken a toll on my mental and physical health," Tatchell said.

"I worry about the long-term impact. Will I be able to carry on for another 26 years, as I would like to?"

He was also assaulted in a 2007 protest in Moscow over his opposition to the Russian mayor's ban on Pride marches.

But the threats have not deterred Tatchell, who in the 1980s was routinely dubbed a "prize pervert" by British tabloids.

He receives between 800 and 1,000 messages and requests for help a day from countries such as Iran, Indonesia and Zambia.

The fight is not over, Tatchell stressed.

And his mother, who features prominently in the documentary, could not be more proud of her son.

"We have religious disagreements," Tatchell said.

"But she's very proud of my human rights work and even to this day can't believe that this rather average, working-class boy from Melbourne, Australia, could end up as a human rights campaigner and public figure."

Twitter Inc's decision to open its first African office in Ghana, citing it as a champion of democracy, is "a slap in the face" for sexual minorities ...
News
5 months ago

Namibia’s high court on Monday ruled against a gay couple battling to obtain travel documents for their twin daughters, born to a surrogate in SA, ...
News
5 months ago

LGBTQIA+ people in SA ‘are under siege’

Simphiwe Mkhize, says he often found himself in fights with fellow pupils who were insulting him and calling him names because he is gay.
News
5 months ago