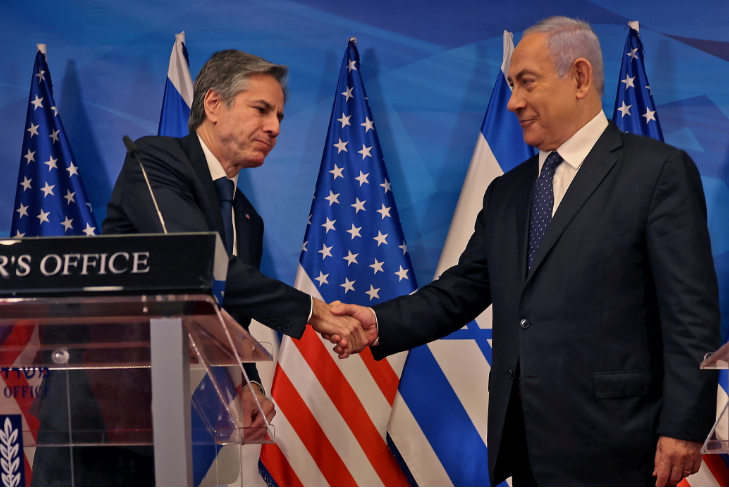 Israeli Prime Minister Benjamin Netanyahu and US Secretary of State Antony Blinken shake hands as they hold a joint news conference in Jerusalem, on May 25 2021.
Image: Menahem Kahana/Pool via REUTERS REFILE - CORRECTING SPELLING OF FIRST NAME

Secretary of State Antony Blinken pledged on a Middle East mission on Tuesday that Washington would provide new aid to help rebuild Gaza as part of efforts to bolster a ceasefire between its Islamist Hamas rulers and Israel.

Hoping to reverse a move taken by former President Donald Trump that angered Palestinians, Blinken said the United States would advance the process of reopening its Jerusalem consulate that had served as its diplomatic channel to the Palestinians.

Speaking alongside Palestinian President Mahmoud Abbas in the West Bank city of Ramallah, Blinken said the United States would provide an additional $75 million in development and economic aid to the Palestinians in 2021, $5.5 million in immediate disaster relief for Gaza and $32 million to the UN Palestinian aid agency based there.

"We know that to prevent a return to violence we have to use the space created to address a larger set of underlying issues and challenges," he said. "And that begins with tackling the grave humanitarian situation in Gaza and starting to rebuild."

Blinken reiterated that Washington intended to ensure that Hamas, which it regards as a terrorist organisation, did not benefit from the humanitarian aid - a potentially difficult task in an enclave over which it has a strong grip.

He said if aid were distributed correctly it could actually undermine Hamas as the group "thrives on despair, on misery, on desperation, on a lack of opportunity".

At a press conference later in the day, Blinken also warned against actions by Israel or the Palestinians that risk inciting tensions or ultimately undermine the two-state solution to which he said Washington was still committed.

Such actions, he said, included Israeli settlement activity in occupied territory Palestinians seek for a state, possible Israeli evictions of Palestinians from East Jerusalem, and incitement to militant violence on the Palestinian side.

The ceasefire, brokered by Egypt and coordinated with the United States, began on Friday after 11 days of the worst fighting between Palestinian militants and Israel in years.

Hundreds of Israeli air strikes killed at least 254 people in Gaza and injured over 1,900, Palestinian medics said, and destroyed or damaged commercial buildings, residential towers and private houses across the tiny coastal enclave.

The Israeli military put Israel's death toll at 13, with hundreds injured as rocket salvoes by Hamas and other Palestinian militants in Gaza caused panic and sent people as far away as Tel Aviv rushing into shelters.

US Secretary of State Antony Blinken began a Middle East visit in Israel on Tuesday, hoping to bolster its ceasefire with Gaza's ruling Hamas ...
News
4 months ago

Blinken began his regional visit in Jerusalem, where he held talks with Prime Minister Benjamin Netanyahu. The Israeli leader, speaking to reporters with the top U.S. diplomat at his side, threatened a "very powerful response" if Hamas renewed cross-border rocket strikes.

Blinken will be in the region through Thursday, and will also travel to Egypt and Jordan.

In tandem with his visit, Israel allowed fuel, medicine and food earmarked for Gaza's private sector to enter the territory for the first time since the hostilities erupted on May 10.

Blinken said reopening the US Consulate General in Jerusalem would be "an important way for our country to engage with and provide support to the Palestinian people". He declined to provide a timeline for the reopening.

The Trump administration merged the consulate with the US Embassy in Israel in 2019, two years after recognising Jerusalem as Israel's capital and moving the embassy there from Tel Aviv.

Those moves broke with long-standing US policy and infuriated Palestinians, who seek East Jerusalem as the capital of a future state.

Israel deems all of Jerusalem, including the eastern sector it captured in the 1967 Middle East War and annexed in a move not recognised internationally, as its undivided capital.

Biden has no plans to reverse the embassy relocation but has acted in the early months of his presidency to repair relations with Palestinians. In April, Biden restored hundreds of millions of dollars in Palestinian aid cut by Trump.

Speaking alongside Blinken, Abbas thanked the Biden administration "for its commitment to the two-state solution (and maintaining) the status quo on the Haram al-Sharif" (Noble Sanctuary), a Jerusalem compound holy to Muslims and Jews that contains the Al-Aqsa Mosque, Islam's third holiest site.

Abbas also voiced gratitude for what he called American support "for the preservation of (Palestinian) residents of ... Sheikh Jarrah," an East Jerusalem neighbourhood where potential evictions of Palestinian families helped spark the Israel-Gaza fighting.

Negotiations between Israel and Abbas's Palestinian Authority, which has limited self-rule in the West Bank, collapsed in 2014. While Biden has said a two-state solution is the only solution to the Israel-Palestinian conflict, U.S. officials have suggested it was too early for wider peace talks.

Israel is in political flux after four inconclusive elections in two years, and the Palestinians are divided by enmity between Hamas and Abbas.

"Leaders on both sides will need to chart a better course," Blinken said, "starting by making real improvements in the lives of people in Israel, Gaza and the West Bank."

In Gaza, Palestinian officials estimated reconstruction costs at tens of millions of dollars. Israel has blockaded the territory since 2007, in what Palestinians condemn as collective punishment. Egypt also maintains restrictions on its border with Gaza. Both countries cite security concerns for the measures.

Jordan's King Abdullah stressed on Sunday the importance of translating the Gaza ceasefire into an extended truce, and said there is no alternative ...
News
4 months ago

Read and weep, but it’s not the end for bombed Gaza bookshop

His bookshop in ruins after Israeli air strikes, Gazan Shaban Esleem hopes to rebuild with crowd-funding help
World
4 months ago

A Palestinian stabbed and wounded two Israelis, one of them a soldier, on Monday near a flashpoint area of East Jerusalem that has been the focus of ...
News
4 months ago