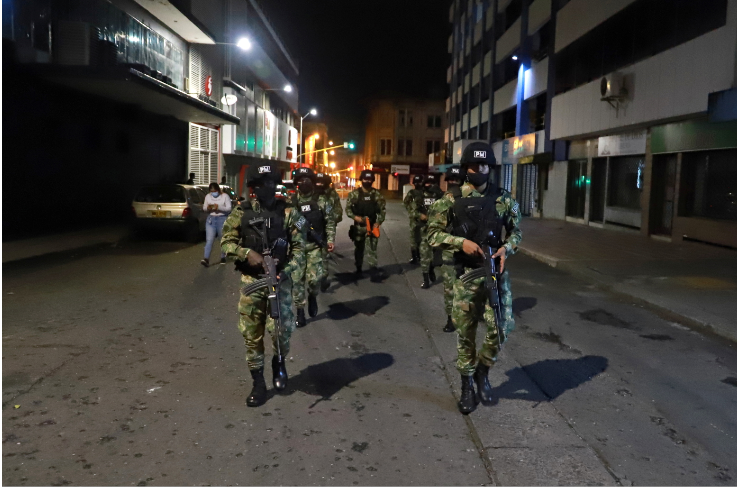 Members of security forces patrol in Cali as President Ivan Duque ordered "the maximum deployment" of military personnel to Cali and Valle del Cauca province following the violence in and around Colombia's third-largest city on Friday, as protests continue in Colombia on May 29, 2021.
Image: REUTERS/Juan B Diaz NO RESALES. NO ARCHIVES

At least 13 people died on Friday in the Colombian city of Cali, the epicenter of demonstrations across the country, and many of those deaths may have been linked to protests, Mayor Jorge Ivan Ospina said on Saturday.

Friday marked a month of often bloody demonstrations across the country. The government has linked 17 civilian deaths and the deaths of two police officers to the protests, which started on April 28, while rights groups say dozens more civilians have been killed by security forces.

The protests were originally to oppose a now-withdrawn tax reform but have since expanded. The unrest has also pressured the government into shelving health reform and prompted the resignation of former Finance Minister Alberto Carrasquilla.

"This fateful day has meant a very significant number of deaths, however we still can't say if all the deaths from May 28 are fully linked and associated with the protests," Ospina said in a video message.

Talks between the government and the protest leaders, including union leaders who have formed a national strike committee, have stalled.

In addition to the 13 deaths reported by the attorney general's office, 34 people have also been reported injured, Ospina added.

At least five of the deaths on Friday were directly linked to the protests, the city's security secretary, Carlos Rojas, said earlier on Saturday.

Confirmation of the cause of the deaths is expected to be announced on Sunday, a representative of the attorney general's office said.

Following the violence in and around Colombia's third-largest city on Friday, President Ivan Duque ordered "the maximum deployment" of military personnel to Cali and Valle del Cauca province, of which the city is the regional capital.

The government and protest leaders reached a "pre-agreement" for ending demonstrations on Monday, but strike organizers on Thursday said the government had not signed the deal and accused it of stalling.

The government has not signed the deal because some protest leaders have not condemned road blocks, it said. Talks are set to resume on Sunday.

Colombia's defense minister on Monday blamed illegal armed groups for looting and vandalism during five days of street protests but would not confirm ...
News
1 year ago

Protests which started in Colombia on April 28 2021 have seen protesters demanding the withdrawal of a controversial tax reform proposed by the ...
News
1 year ago